Anger’s not the goal. It’s the fuel.

One of my readers recently took offense at my criticisms of President Obama’s performance while in office. Below, I will try to properly reply to her statement that I don’t give Barack Obama enough credit for a job which she believes he has done well. I disagree. And to be clear, it’s totally okay to disagree. I don’t seek to change anyone’s opinion. Rather, I offer up my own opinion because to not do so would be intellectually dishonest. I’m a lifelong Democrat, who voted twice for Barack Obama and so my conclusions did not come easily.  In the end, I simply had to conclude that Obama does not at all share the values that I hold dear, namely, reversing our path towards climate chaos and environmental destruction.

Reader’s comments: “Ol Carville was screaming at him about the deep water horizon spill, “we’re dying down here and you’re doing nothing!” As if what all could be done wasn’t being done and that it was Obama’s fault that bp had been given the option to use the less expensive and effective safety devices instead of the ones that would’ve stopped the fucking spill.

Omg schatzkie, exactly when did he promise to be a climate warrior in your fantasy land? One where presidents can run big oil out of dodge on.a rail, flush them out through their own pipelines cuz presidents are so much more powerful??? What planet are you from bc here on planet earth big oil owns the majority on the supreme court and both chambers of congress, not to mention plenty of red state legislatures and dealing effectively with that.”

Obama after the Deepwater Horizon spill: “Make no mistake: we will fight this spill with everything we’ve got for as long it takes,” he said. “We will make BP pay for the damage their company has caused. And we will do whatever’s necessary to help the Gulf Coast and its people recover from this tragedy.”

From CBS News: He also announced that he is directing a compensation fund be set up for workers and businesses harmed as a result of the leak. The fund will be administered by an independent third party in an effort to ensure that claims be paid in a “fair and timely manner.”

The president spent a significant portion of his remarks pressing for a transition away from fossil fuels, though, notably, stopped short of specifying what he would like to see in a climate and energy bill.

In Obama’s own words: “Now, there are costs associated with this transition. And some believe we can’t afford those costs right now. I say we can’t afford not to change how we produce and use energy – because the long-term costs to our economy, our national security, and our environment are far greater.”

Obama stressed that the fund will not be controlled by BP, but he did not specify how big it will be. On Monday members of Congress requested that BP put $20 billion into such an account as a “first step.”

Schatzie: The GCCF (Gulf Coast Compensation Fund) to reimburse those impacted by the disaster WAS indeed run by BP (Kenneth Feinberg, a BP lawyer). It was mismanaged, badly run, people suffered terribly under Feinberg, whose firm made millions of dollars. In most cases, Feinberg made much more than the claimants, many of whom had their claims rejected outright as they lost their homes, businesses, health insurance, and potentially their lives when they couldn’t get to dialysis because they had lost their cars (non payment) and their health insurance. Many ended up receiving a fraction of what they were supposed to get because of BP’s handling of the fund, via Feinberg.

Obama: “For decades, we have known the days of cheap and easily accessible oil were numbered. For decades, we have talked and talked about the need to end America’s century-long addiction to fossil fuels. And for decades, we have failed to act with the sense of urgency that this challenge requires. Time and again, the path forward has been blocked – not only by oil industry lobbyists, but also by a lack of political courage and candor.”

“Now is the moment for this generation to embark on a national mission to unleash American innovation and seize control of our own destiny. The one approach I will not accept is inaction.”

Schatzie: So, there HAS been action. But the action is to “unleash” that innovation to increase gas and oil production: 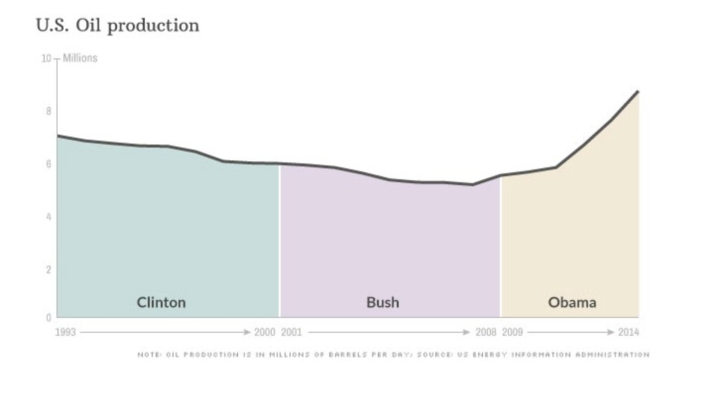 While throwing loan guarantees at dirty energy, with a fraction of those loan amounts going to renewables. DUH. Such horrifically BAD policy:
https://schatziesearthproject.com/2015/01/05/not-even-wrong/#more-1328

Reader’s comments: “…Anyway its just one example of the negotiating powers and strategies of Obama and why I trust him to negotiate the best possible trade deal for us in tpp. How he also negotiated and exacted the best health care deal for us, one that’s proven to be an unqualified historic success, is another reason why your distrust and disappointment with him is unwarranted unfair premature and grossly inaccurate. As evidenced by your use of vague nonspecific generalizations, your irrelevant references to things like race and gender and your skewed Willy nilly perspective on the purpose and subject of this conversation. Hint: its not about you or me or how we ‘feel’ about a particular president , its about the bigger picture of planet earth and how in between the way it is and the way it outta be, there’s the way it can be, if we the people only stay focused and make it happen. Happen in Baby steps if not leaps and bounds, but forward always forward, and with the right leadership. Imagine what a positive impact it would have on planet earth if the world’s biggest producer of oil suddenly divested and went 100% green. Schatzie: the world’s biggest oil producers are NEVER going to suddenly divest. Divest from what? Themselves? That makes no sense at all. The only way they are going to die off is if they are shut down and criminalized, and under Obama, they are doing better than ever.

Reader’s comments: “TPP which you know nothing about and are just operating on what you’ve heard, suspect. and those couple of hypotheticals that might cause this or lead to that???? If that is whatever negative outcome you think is gonna happen, happens??????”

Schatzie: You’re wrong that I don’t know anything about TPP. Here are at least 8 times that I wrote about it:

Reader’s comments: “You’re still very very short on specifics to justify your huge expectations and subsequent disillusionment with this president. And without them you’ll never be convinced that Obama’s on the same side you claim we’re on, even tho he is. In terms of developing green energies and reducing carbon emissions incrementally and substantially, stalling on the kxl pipeline while increasing production of domestic oil at already existent sites and driving down the price of oil and the potential profits that bakken and transcanada are counting on to make their pipeline and fracking operations not only affordable to build operate and expand but extremely lucrative and more attractive to foreign buyers than oil from OPEC as well, just a few examples of the bigger plan to transition us away from fossil fuels and dependence on foreign oil and markets, and into greener energies and industries in near the future. And as more countries and individual states divest, and OPEC continues on its kamikaze course of refusing to lower production rates and adding to the glut of cheaper and cheaper oil, we’ll be cutting our production of oil here and the incentive of shell for instance, to drill for new sites in the arctic.”

Schatzie: He’s not stalling on KXL. Segments of that pipeline got built already! Why? How did THAT happen? They didn’t need approval, thanks to Obama’s State Department “go around.” And the reason the level of profitability for oil and gas extraction and production has been halved is because the US has flooded the market with petroleum products to the point that OPEC is punishing us. For no other reason than our own greed and Obama’s green lighting every fucking project, which has created such an overabundance of oil and gas products that we are running out of places to store it. So what’s Obama’s solution? Allow backdoor, sneaky and essentially unregulated ways for oil and gas to be exported, also something I’ve written about:

Secretly allowing oil and gas exports through the Dept. of Commerce:
https://schatziesearthproject.com/2015/01/13/whos-ready-for-a-revolution/

And there is this little clusterfuck whereby liquefied natural gas gets approved for export to countries which do not have free trade agreements with the US (but WILL have them when TPP passes, by the way) which allows them to export a shitload of natural gas, fracked natural gas, under Obama’s sneaky, back alley scheme:
https://schatziesearthproject.com/2014/12/07/rotten-from-the-inside-out/

Reader’s comments: “All the while he’s engaged in battle with the insurance industry and the politicians both repub and dem they had in their pockets. And after he fought long and hard for the public option and lost, dems like Weiner went on the morning shows blasting him for not fighting hard enough for it and saying that without it the ACA was worthless and doomed to fail. He didn’t have any part in deregulating wall street and the banks either, only in re-regulating them in the wake of their massive act of malfeasance. But there was warren blasting him anyway for not going on some mass roundup of all crooks, CEOs fed officials, anyone involved in the whole too big to fail scheme which just happened to be everyone, the same everyone he needed to help him prevent a stock.market crash and who were mainly guilty of doing what no regulation forbid them to do to begin with. Make sub-prime loans out the ass, trade in derivatives like crazy and merge their massive troubled assets and trading companies just before bush left town. His priorities were clear and spot on and his negotiations with the main culprits resulted in their choosing to work with him to save the economy. What would’ve been gained by doing what warren wanted him to do, political theater with her the star?”

Schatzie: Wrong. 7 years after Wall Street and the banks nearly brought this nation to its knees, the policies and laws that were supposed to be written and put into place HAVE NOT been. And we are getting set up for another bubble burst:

http://www.csmonitor.com/USA/Latest-News-Wires/2013/0819/Obama-Five-years-after-the-crash-Wall-Street-remains-too-unregulated
[By the way, the title of this article comes from an incredible segment with W. Kamau Bell which I heard on “This American Life.” The comment comes from a black father who had educated his daughter about racism in America. It was an incredible, inspiring show. If you would like to listen to the full audio broadcast, here it is and Bell’s segment begins at around the 18:55 mark]