You’re in the Army now

If you’re reading this electronic post, consider yourself enlisted. And you’re not alone. You are joined by 2 billion other soldiers all around the world. What? You didn’t sign any forms? Doesn’t matter. As a member of the human race, and someone who is as empowered as any government, or standing army, it is your obligation to fight terrorists.

I’m referring, of course, to ISIS or ISIL, or whatever they call themselves. One thing is certain about that gang of thieves: they are not Islamic “anything.” In fact, the people they terrorize and kill the most are other Muslims. Don’t let their highjacking of the word, “Islam” fool you. They could just as well be called, “Christian State of Texas,” (CSOT), or “Hindu State of Punjab,” (HSOP) but let’s leave (all) organized religion out of this since what happened in Beirut, Ankara and Paris has nothing to do with any faith on Earth. Can you imagine being lumped in with those assholes? Let’s say, just for the sake of argument, that instead of stealing the word “Islamic,” they misappropriated the name of a sports organization. So now they’d be, for example, The Bronx Bombers (apparently a nickname for the New York Yankees baseball team). What if, by some unlucky coincidence, you were a lifelong Yankees fan? I bet $20 bucks you’d keep a low profile, since those Bronx Bombers guys are beheading and terrorizing people everywhere. You’d probably take your beloved pendants down from your walls, not wear your Yankees baseball cap, scrape your bumper sticker off the family car, and maybe stop attending the games, or, at the very least, stop tailgating since it (now) seems disrespectful given the bad behavior by those nut cases (who you’re now stuck being affiliated with).

Or what if the terrorists had a different modus operandi? What if, instead of being non-white, the terrorists are all Caucasian with brown hair cut in just one “particular” way.

Now these terrorists are focusing their wrath on brown haired people with the wrong haircut. If you, by chance, had brown hair, you’d hide it, wouldn’t you? Both because you wouldn’t want to be targeted by those terrorists and also because you wouldn’t want people to assume you’re one of them. If something like that is too farfetched to imagine (and you can stand the violent imagery), the band, MIA, did a music video with this premise. It can be seen here. It’s a slippery and vicious slope.

But what “are” those terrorists who are gleefully torturing and killing innocent people, anyway? They’re simply thugs. And killers. So let’s call them what they are: “Thugs and Killers,” or TAK. And they’ve got pretty good at monetizing their “brand,” too, so let’s add, “Inc.” to their moniker. So now they’re TAK, Inc.

ISIL/ISIS/TAK, Inc. may or may not have stolen who, or what, you are, but it would be that easy to have your life, your identity, and your level of personal safety, turned upside down. Now imagine you’re desperately trying to flee a place like Syria, or the Bronx, places where TAK, Inc. is hunting you and your family down like scared rabbits. And as you’re running for your lives, all along the way, people look at you like you’re one of them – you know, the bad guys. Not only have TAK, Inc. killed so many people you know, they’ve stolen your lives, your identity, everything, and as you’re trying to just find a safe place, BOOM – people think you ARE them. Or you KNOW them. Or, somehow, when they least expect it, you’ll BECOME them.  It must feel like being trapped in a nightmare.

Now, here’s where the soldier part comes in. Think back, if you can, to the time just after September 11th. Everything changed. And not for the better. Many things we took for granted, like privacy and personal safety, were stomped upon. Trampled, really. The organizations that we may have thought were the “good guys” like the FBI or NSA, who we may have felt were there to protect us, suddenly felt more like the enemy. In fact, a whole bunch of assumptions essentially got thrown into a really big blender, with things we previously had clear feelings about (“good,” “bad,” “don’t care,” “never thought of”) all getting mixed together, creating a disgusting, confusing mess… 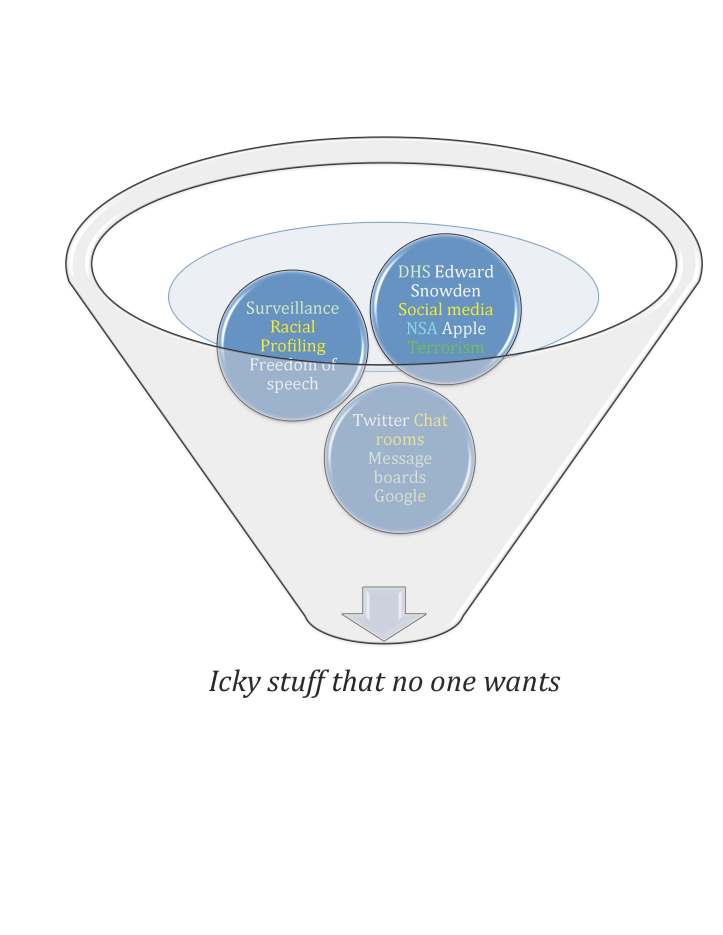 That was fourteen years ago, which is a lifetime in terms of how technology has progressed. And that technology has also enabled and empowered the new bad guys, who I’m just going to call TAK, Inc. (because they’re not Islamic “anything”). Unlike previous bad guys who we would be “at war” with, TAK, Inc. has no “nation.” They have no borders, and they don’t have a government, they don’t carry ID cards, and they don’t have a military. I don’t know if you can vote when you’re in TAK, Inc., but I doubt it. They are nowhere and everywhere.

There is one “place” or thing, they all need. It’s the internet. And it’s a pretty damn big place. Sort of like finding a needle in a haystack, except that there are around 2 billion of us sharing that same hay with them. This is very different from 2001. Sure, there was an Internet back then, but it was NOTHING like it is today. I keep coming back to the “hive mentality,” which I am certain is the key to our future, be it for good or bad. Until the chips fall on one side or the other, for me, right now, it’s “good.”  I watched President Obama speak from the G20 summit this morning, and I was waiting, and wishing, that he’d tell people to stick up for each other, and to stand together and help smoke out the bad guys. Empower people, and join us together against evil, unlike what I hear in the rhetoric of GOP presidential candidates. The power of the people is huge. It’s untapped. Social media platforms don’t want to “rat out” their members. I’d guess that most big companies like Google and Apple really don’t like opening up all of our communications to scrutiny any more than we want to be spied on. It’s a “lose-lose” for (almost) everyone. But what’s the alternative? Just wait for something bad to happen which results in the loss of more personal privacy?

What I’m saying is that each and every one of you, since you’re reading these words on the same internet (more or less) that the terrorists are using, are now soldiers in the fight against those bastards. All the things that we “lost” after September 11th are still up for grabs. If governments and organizations need to root around, among us, and within our communications because they can’t have eyes and ears everywhere, we need to be the hive – that helps, not hinders. That does not mean forfeiting your phones and giving out your passwords and rolling over on your backs life scared puppies, just assuming someone, somewhere, will protect you. It means that you keep an eye open, an ear to the ground (Internet), and it means that you share this notion, especially, with your kids and particularly the youth of today. Wherever they’re “at,” there are other young people, and terrorists LOVE young people, especially disenfranchised kids. They’re like potato chips – easy to get and cheap. And you just can’t have one. But someone, somewhere knows that their neighbor, brother, cousin, tenant, is up to something which just feels “wrong.”

I guarantee you, with 100% certainty, that when bad guys plan to kill and hurt and terrorize people, other, uninvolved people know about it. They may happen upon something, they may put 2+2 together and suddenly think, “oh shit…no, it can’t be. Hmm.” Where might that happen? A chat room. A message board. An online game, like those Playstation platforms. On Twitter. On Facebook. Snapchat.”All of the above.” I also guarantee that there are places where terrorists inadvertently intersect with good guys to buy their stuff, which may seen innocuous but can be combined with other stuff to make bombs. It’s probably nothing, but you never know. I’d bet it’s happening right now, right this second, somewhere.

I went to the FBI website to look at their campaign, “See something, say something.” Sounds promising, right? Well, in the end, they say to call “911,” which is, of course, a fine idea. There are also other ways to tell them that you’ve come across something hinky, or just not right. They have a page with information about reporting threats or possible crimes, and they have an online form you can fill out here. If you are not in the US, but you hear or see something and want to let them know, use this page.

What happened in Paris is horrific. What also happened in Beirut, Ankara, and aboard a Russian jet is similarly horrific. These terrorists, whatever you choose to call them, are a bunch of assholes and they’re murdering Muslims more than any other group of people. Killing, raping, enslaving, beheading, torturing, terrifying — E-V-E-R-Y-O-N-E. They are equal opportunity terrorists. Basically, no one likes them. They’ve issued further threats. That’s the bad news. The good news is that what comes next is up to each and every person that reads these words.

Together, standing against terror, we win. When we become splintered, separated and pointing cowardly fingers at the EXACT people who are suffering the most, which are Muslims and defenseless refugees, they win. We need to take care of each other, watch each other’s back, and, again, if you see something, please say something.

So put on your flak jacket, spread the word, and let’s put this hive to good use.