It’s incredible how fast GOP presidential candidates and Republicans have used the bombings in Paris to turn their back on defenseless refugees seeking safety for themselves and their families. The Republican candidates are like a bunch of lemmings, following Trump’s lead, hoping to replicate the (sick) nerve he touched when he began insulting Mexican immigrants. Now, the echo chamber of hate is forcing many others to jump on a bandwagon which shouldn’t even exist. I’m not buying ANY of it, and neither should you. We are being manipulated into blaming the wrong people entirely. Politicians in the US, in particular, have no right to divert blame anywhere. And watching Jeb Bush, of all people, shirking responsibility for this situation and hanging Syrian refugees out to dry would be funny if it weren’t so sad.

Here’s a rundown of some salient points about the Syrian and Middle Eastern situation. They are roughly in chronological order, but there is some overlap:

1) The United States and Britain have been interfering in Middle Eastern politics in order to secure oil and resource extraction rights since the end of World War II. Franklin D. Roosevelt’s signing of the Anglo-American Petroleum Agreement in 1944  was intended to divide Middle Eastern oil between the US and Britain.  America, filling a power vacuum eventually left by the British, fought much of the Cold War against the USSR in the Middle East,  securing critically important oil, gas and other natural resources and transportation routes.

2) I think the seeds were sown for today’s terrorists and their hatred towards the West in the late 1970’s in Afghanistan, which was used as bait to lure the Soviets into a ruinous, prolonged proxy war. The modern retelling of that war is that the US intervened in Afghanistan only after the Soviets invaded, however, there is substantial evidence to support the fact that we provoked them, (correctly) anticipating the ruinous aftermath. Jimmy Carter’s national security advisor, Zbigniew Brzesinski had this to say in a 1998 interview in Paris with Le Nouvel Observateur:

Brzezinski: According to the official version of history, CIA aid to the Mujahadeen began during 1980, that is to say, after the Soviet army invaded Afghanistan, 24 Dec 1979. But the reality, secretly guarded until now, is completely otherwise. Indeed, it was July 3, 1979 that President Carter signed the first directive for secret aid to the opponents of the pro-Soviet regime in Kabul. And that very day, I wrote a note to the president in which I explained to him that in my opinion this aid was going to induce a Soviet military intervention.

Q: Despite this risk, you were an advocate of this covert action. But perhaps you yourself desired this Soviet entry into war and looked to provoke it?

B: It isn’t quite that. We didn’t push the Russians to intervene, but we knowingly increased the probability that they would.

Q: When the Soviets justified their intervention by asserting that they intended to fight against a secret involvement of the United States in Afghanistan, people didn’t believe them. However, there was a basis of truth. You don’t regret anything today?

B: Regret what? That secret operation was an excellent idea. It had the effect of drawing the Russians into the Afghan trap and you want me to regret it? The day that the Soviets officially crossed the border, I wrote to President Carter. We now have the opportunity of giving to the USSR its Vietnam war. Indeed, for almost 10 years, Moscow had to carry on a war unsupportable by the government, a conflict that brought about the demoralization and finally the breakup of the Soviet empire.

Q: And neither do you regret having supported the Islamic fundamentalism, having given arms and advice to future terrorists?

B: What is most important to the history of the world? The Taliban or the collapse of the Soviet empire? Some stirred-up Moslems or the liberation of Central Europe and the end of the cold war?

Q: Some stirred-up Moslems? But it has been said and repeated Islamic fundamentalism represents a world menace today.

B: Nonsense! It is said that the West had a global policy in regard to Islam. That is stupid. There isn’t a global Islam. Look at Islam in a rational manner and without demagoguery or emotion. It is the leading religion of the world with 1.5 billion followers. But what is there in common among Saudi Arabian fundamentalism, moderate Morocco, Pakistan militarism, Egyptian pro-Western or Central Asian secularism? Nothing more than what unites the Christian countries.

What followed were decades of war, death, destruction, and misery. Here’s a photo (the rest of this photo series can be seen here) illustrating how lush, beautiful, modern (and non-extremist) Afghanistan was before we ruined it:

3) Ronald Reagan supported (in every way) the mujahadin in Afghanistan (including Osama bin Laden) in order to oppose the Soviet Union, leading to the creation of the Taliban and al Qaeda, which we also supported, and then ISIS/ISIL. I highly suggest this article by Ben Norton which recently appeared in Salon. Every American needs to be either reminded or educated about what we did to create the current mess we’re all now dealing with. Here are a few  photos from Ben Norton’s excellent article. The first is a 1993 UK newspaper article from The Independent lauding the efforts of (a smiling) Osama bin Laden who was our best buddy, helping us fight the Soviets: 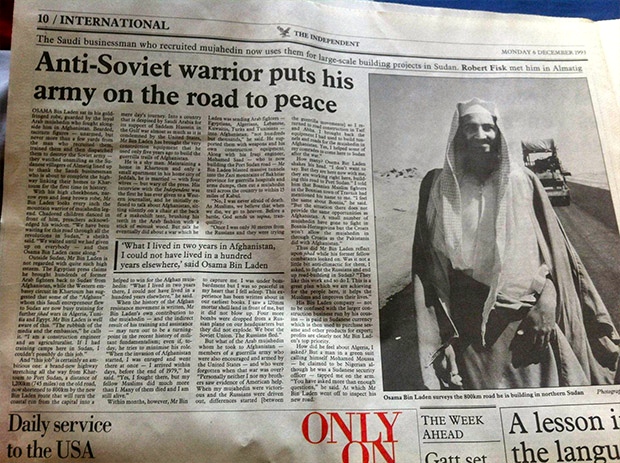 And this is a photo of Ronald Reagan meeting with a mujahadin “freedom fighter” in the White House (also courtesy Ben Norton):

During this same period, the US also provided Saddam Hussein with mustard gas and sarin gas to aid in his fight against the Iranians, resulting in thousands of casualties – and, of course, creating more hatred towards the West. Fast forward to Hussein using chemical weapons against his own people and the West pretending we didn’t know how he got the nasty stuff. Or how about fast forward to just before the US invaded Iraq in 2003, and there was a reported transfer of Iraqi chemical weapon shells to Syria for “safe storage” before we invaded.  Or how about the large stash of chemical weapon shells seized by ISIS/ISIL from a warehouse north of Baghdad…those same chemical weapons which were provided by the US government to Iraq in the first place. It’s not conjecture. It’s fact. Those chemical weapons, which were intended for use against Iran and which were authorized by Ronald Reagan, were used by Syria against their own people. And then ISIS/ISIL used them against the Kurds, also in Syria. You can’t make this stuff up. It’s just shameful.

4) Let’s get back to Iraq. In 2003,  Dick Cheney et al made up bogus reasons and fabricated information in order to invade Iraq for oil, thus gutting and ruining that country, further fueling hatred towards the West as millions of innocent civilians suffered and died. 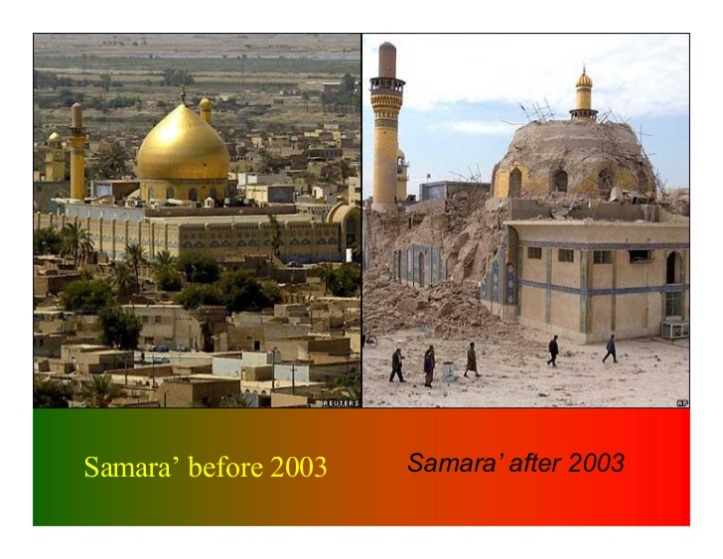 5) Islamic extremism, nationalism, or whatever you want to call it (how about just a bunch of really pissed off people? Let’s drop the “Islamic”), a concept which hadn’t been seen for the 400 years preceding our meddling in the Middle East, was stoked and fueled by the United States who have managed to kill, maim, and decimate an entire region, along with northern and eastern Africa. Our reckless and myopic foreign “policy” is now spreading to other parts of Africa, such as Angola and Nigeria. All this destruction is, in large part, still for oil and natural resources, and for proxy wars against Russia and (now) China. We’re destabilizing that region which is going to lead to (drumroll please….) more violence and terrorism. Who do you think that anger will be directed against? Can we really blame them? Having said that, let me be clear that there is still no excuse for cold-hearted murder – by anyone.

6) Maybe, maybe, one Syrian passport was used to enter France, and was conveniently “found” at the site of the Paris bombings. Seriously? A jihadist suicide bomber bizarrely decides to carry his passport on his way to blow himself up. And the passport doesn’t get destroyed or blown away by the blast, and it’s just sitting there, waiting to be found. When found, it is then used to damn an entire group of desperate people that no one wants to deal with in the first place, trying to escape a regional “crime scene” which WE created. “Scapegoating” is far too kind a word here. I watched French security expert General Vincent Desportes say on the BBC that the problem is “European,” and “homegrown” with terrorists who are able to freely travel into and out of France. He never once blamed the Syrian (or any other) refugees.

There have been over 3 million Syrian refugees who have fled the horror of a mess we created, with maybe one person taking advantage of the mayhem to make a fake passport and bomb something. What percentage would that be? How about .00000033% – and yet scores of governors in the US, GOP presidential candidates and several members of Congress are just crazily jumping on an excuse they’ve been just dreaming for for months.This is madness. I would ask, or even beg, readers to step back, think about what kind of track record the US has in the Middle East (abysmal and bordering on diabolical), think about how much violence, warmongering, and misery have been orchestrated with literally zero regard for (anyone’s) life by the US government, who are in cahoots with the fossil fuel industry and who are both fully aware that nothing will boost oil prices like more war and a bigger military industrial complex.

If my readers are wondering why I care, or how this applies to climate change, it’s not complicated. We are in a radically changing world. Very bad things very well may be just around the corner. How we deal with those in need, either with disdain and contempt, or with compassion and empathy, will decide if we fail or succeed as a species. We evolved and survived, in large part, thanks to our human ability to cooperate and care about each other. As it stands, right now, we are not well-positioned to weather what is bearing down on us.

Syrian refugees are refugees because of us. In the age of information, no matter how ridiculously complicated it might seem, we now have access to past stupidity and previous wrong-doings and we each have an obligation to stand up for those less fortunate. Today’s “soft targets” in the Middle East and Paris might very well be tomorrow’s in the United States. It’s correct to be angry and understandable to be scared, but it’s entirely incorrect not to assign blame where it belongs, not to take responsibility for our actions, and then punish the very people who we have damaged the most.