Used. Manipulated. I’m not even kidding. And this isn’t “reverse psychology,” or a mind game. Three things tell me this is exactly what’s going on. One of those things is my gut, which is hard to substantiate but I have a very strong feeling that you’re being used. The second thing that tells me that you’re unwittingly filling an entirely different purpose are the facts. The third thing is history.

When the Paris attacks happened last week, my first reaction after being horrified was that this was about the climate talks slated to take place in Paris. I know. You’re shaking your heads, rolling your eyes, and thinking, “WTF? We don’t care about global warming.” Right. I know that. Which makes you guys perfect for the job. Just think about this: how difficult would it be for you to be encouraged to unleash your fury on Paris? There are lots of reasons for France to be a target, but there are lots of reasons for a lot of places to be targets, right? How hard would it be for someone, something, somewhere to suggest to your group that Paris, right now, would be just a great place to hit? And this may be unprovable, with many forces unseen, removed from what anyone is being implicitly told. I’m not saying the “mastermind’ or planner of anything even realized he was being manipulated. That would be too obvious. And if you’re thinking, “Well, we had this attack planned a long time ago,” my response would be that the Paris climate talks were scheduled a long time ago, too. Literally, years ago. This is my gut feeling about it. But let’s look at the facts. 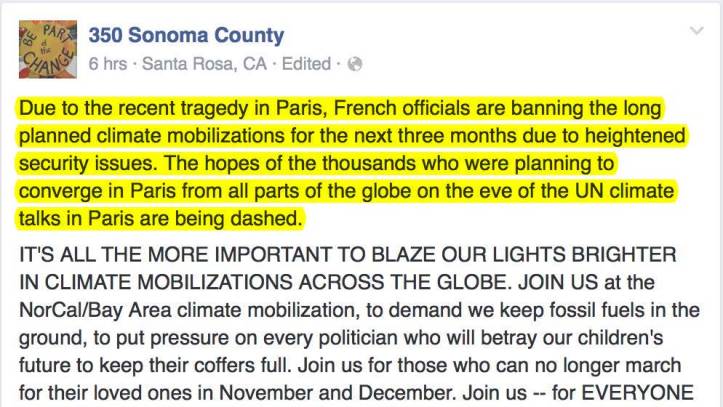 Now, you might be thinking, “Excellent. We’re having an impact, ruining stuff and disrupting things.” but that’s not the point. You’re angry at the wrong people, the wrong “thing,” and if this is what was supposed to happen (that’s my gut speaking, again), you’re being used, hurting innocent people who are not part of the problem in any way. In fact, all this killing and mayhem is serving some other purpose entirely. Plus, it’s just a really horrible thing. Please stop it.

5) Think about this: How is it that your oil business has been allowed to succeed all this time?

We’re not talking about the kind of business you operate out of your basement, right? It’s huge and I promise you that the West can see a mole on your nose with satellite images. They can tell when you’ve had a haircut. And the West has drones. They hardly even have to get off their proverbial chair to bomb the crap out of anything or anyone anywhere on Earth. If they wanted to disrupt your source of income, it would be disrupted. Now that Trump, et al, are banging the drum to go after the oil, we’re timidly going after trucks en route to delivering the oil and I’m watching Wolf Blitzer on CNN asking Pentagon correspondents and members of Congress why we’re not hitting them at their source. If you get a chance to watch that kind of questioning, check out the responses. It’s hilarious. Such bad, bad liars – not even half convincing.

Now don’t get too happy or smug about this because, as you know, this is changing under Vladimir Putin, who you guys really pissed off when you blew up that airplane. He’s kind of like a honey badger. He’s not going to follow any big plan, or scheme, and he’s not going to listen to anyone. He’s just going to open a can of whoop ass on you.  In fact, an American news show recently had to use footage of the Russians blowing up your fuel tankers because there was no film of us doing it.  Which is not to say that the West doesn’t have random, intermittent “wins” against you, because it has to. The reason I bring this up is that it should be telling you that you’re being allowed to do what you do for reasons that probably run counter to what you stand for.

Let’s just tell it like it is. You’re killing Muslims – probably in greater numbers than non-Muslims. Basically, you’re killing anyone you can get your hands on. So let’s be honest: you’re just really pissed off at the world. You have a white hot fury, an intense anger and hatred directed not at a certain person, or type of person. It’s just directed outwards. And you’re young and you’re angry, no one is listening to you, you feel invisible and misunderstood. Guess what? That makes you human. And normal. With youth and modern technology comes a desensitized (to violence) group of kids, marginalized and super pissed off. And even though I highly suspect that many things you do are playing into what the exact wrong people want, basically just making everything worse (and I know you’re just waiting to see who, or what, you should be blowing up…right?), you’re going about this ALL wrong. But first, let me throw out a little history, which is the third thing that makes me suspicious about what’s going on:

he’s not worth your effort. He’s old and senile and he’ll die soon enough on his own.

Since the mid-1800’s until now, modern civilization has literally been fueled entirely by coal, oil, and gas. Maintaining that status quo is the top priority of many in power;

2) The Taliban, the mujahideen, and al Qaeda all started out as pawns in the eyes of the West. And as you know, those groups are considered the “forefathers” of ISIS/ISIL, therefore, this weird “relationship,” inter dependence and all the false narratives that go along with it should never be forgotten even though that stuff happened before most of you were born;

3) The West needs an enemy it can direct itself at, other than Russia and China, which would lead to World War III. War is good for the fossil fuel industry. It’s also incredibly good for a few other things like the military industrial complex, which then gets ramped up and super-sized. It’s also used to discriminate against people who the bullies already don’t like. And war has been used in the US and the West to scare people into allowing their personal freedoms and rights to be trampled. This makes the Islamic State the perfect “enemy.” You’re everywhere and nowhere. Everyone can be the enemy, even our own kids. Immigrants are in the bullseye here in the US, and they shouldn’t be. Basically, war and terrorism are a distraction from what are truly existential threats. You don’t want to be “that guy,” trust me on this.

So, I know you want me to name the real enemy, but it’s not that simple. Instead of Franken-trucks of death, explosives, and suicide vests, I would like to show you the real weapon which will slay the enemy (don’t laugh) and truly change the world: 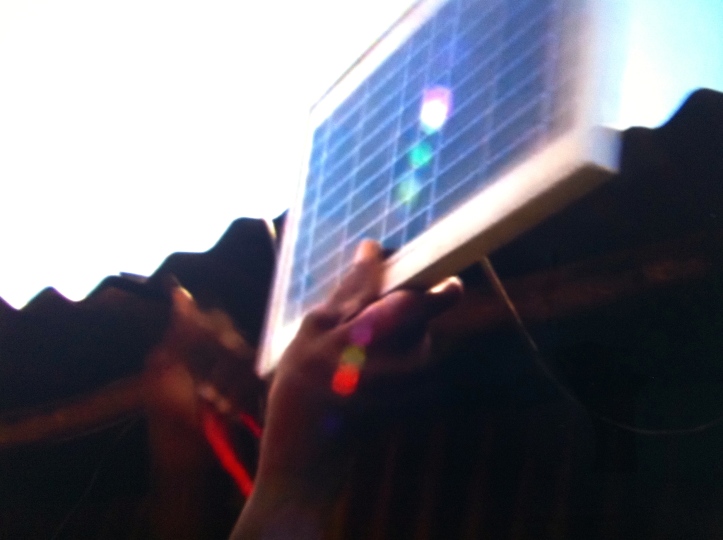 Because the enemy is not a person, or a place, or even the fossil fuel industry, per se. The enemy is poverty, despair, illness, marginalization, and lack of education. And that little, dinky solar panel above, which was bought by a pig farmer in Nairobi, was made possible by this guy:

(who doesn’t seem like much of a revolutionary, but he is) who has a company, M Pesa, which enables mobile “banking” all over unexpected places like Kenya. This helped the pig farmer acquire electricity, which now lets his kids do their homework at night, in the safety of their home, all thanks to A FREAKING LIGHTBULB, powered by that one solar panel.

And while no one can say with certainty that those kids won’t grow up to be angry, marginalized terrorists, I’m betting they won’t.

I’m also thinking that such an innocuous, utterly benign thing like a solar panel, or maybe even a bicycle you pedal to make your own electricity, can be revolutionary and will indeed change the world for the better without any violence whatsoever, making atrocities like what happened in Paris, and what will now not happen in Paris (a robust climate discussion), unnecessary. This type of revolution will also effectively render corrupt companies like ExxonMobil a relic of the past, thus making war less inevitable. And poverty, which is the real enemy, and which deserves to be snuffed out with the passion that you guys in the Islamic State clearly have, will be relegated to merely an ugly footnote in what I hope will be a very long book about the human species.