There’s a 100% chance that the Earth will be struck by a major coronal mass ejection (CME) from our Sun. This will result in many millions of deaths and effectively knock us back, technologically-speaking, into the 1800’s. This may be a surprise to some people. Not only is there a 100% chance this will happen, but we are, in fact, overdue. There is also 100% certainty that our planet will be hit (again) by a gamma ray burster which will wipe out most, if not all, life on Earth. We can protect ourselves from one of those things, but not the other, and it’s really important to understand and acknowledge that distinction. The CME is worth thinking about. The gamma ray burster is not.

Here’s what a CME looks like, by the way: 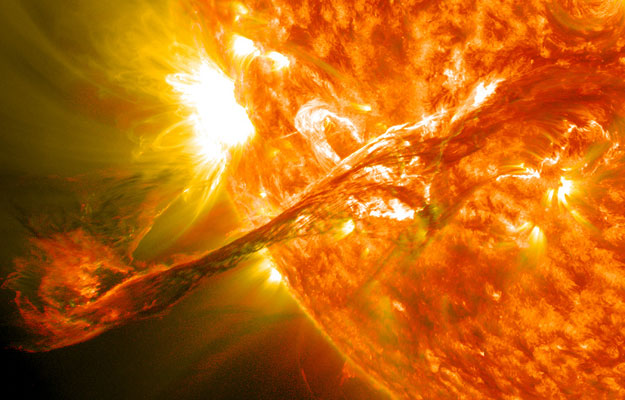 A coronal mass ejection will take out our modern power grids. If you’re thinking, “uh oh, better stock up on some candles,” well, unfortunately, there aren’t enough candles in your time zone to see you through this event as it will be catastrophic. You’re possibly thinking that you just can’t take another looming catastrophe right now, aren’t you? I totally get it, but this catastrophe can be planned for. We can thank the idiots we a) elect and b) employ in government for not doing much about this actual threat.

I recently came across an article appearing in The Hill discussing the need to gird up the power grid against potential cyber attacks. This seems simultaneously like something that should have been done already, and a knee jerk reaction to the Paris attacks. A 2010 article appearing in Foreign Affairs goes into great detail about how terrorism is not actually an existential threat for most people living outside a war zone. Statistically, then and now, our odds of being impacted by terrorists are so remote, so far behind so many other (actual) threats to our safety that it’s become a “self licking ice cream cone,” with no end in sight. In fact, Foreign Affairs discusses expenditures on counterterrorism, just in the United States from September 11, 2001 to 2010 (and excluding the cost of wars in Iraq and Afghanistan) and pegs the cost at $1 TRILLION dollars. This hysteria was, and is, completely out of line with the actual threat.

And we should all prepare ourselves for such calls-to-action like the one appearing in The Hill, by the way, because lurking around every conceivable corner are wish lists looking to be filled by having a major war or even just the spectre of war. It’s like Congress is one big, creaky hammer desperately seeking a nail, particularly with elections taking place next year. History tells us that the GOP does better in elections during times of war and crisis. That’s somewhat of self fulfilling prophecy, but we should now be attuned to such clarion calls. But I digress…

CME’s and dodgy and violent space weather are unpredictable, except when they’re not. Scientists know that our Sun has some pretty big hissy fits every 100 hundred years or so. The last major CME was in 1859 and it was dubbed the “Carrington Event.” Think back to what the year 1859 might have been like, technologically speaking. Now think about what 2015 is like. BIG difference, right? We need energy for literally everything. We need the grid to keep airplanes in their right places in the sky, to cool white hot nuclear reactors and prevent them from a meltdown, to keep hospitals, your phone, (which uses GPS to know what’s going on – shout out to Albert Einstein!) and all city services running, and that’s just to name a few things. I am oversimplifying, of course, but the bottom line is that power grids have become MUCH more important and yet, they’re much more vulnerable to disruptions. 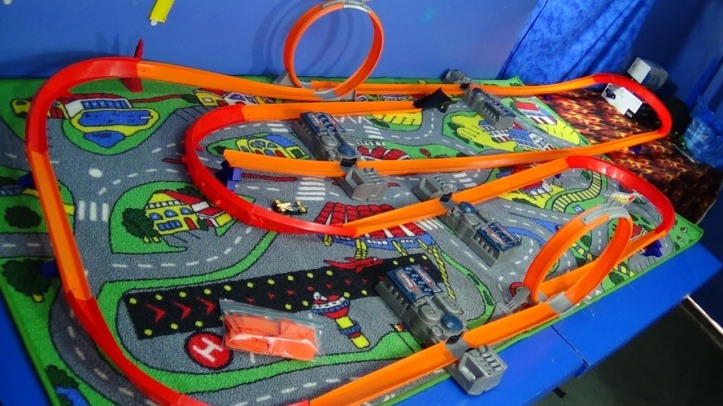 It may start out small and simple, but as you add more pieces of track and they become connected and sprawl out, they also become reliant on each other segment to “be there.” Oozing chocolate syrup onto one section is going to potentially spread to the whole thing. Maybe that’s not the best analogy for electricity. Think of it like this: As our need for electricity becomes greater, utilities “snap on” more pieces to the grid, to the point that it’s a HUGE, ginormously connected “sitting duck” monolithic structure. Imagine entire regions and swaths of the planet all relying on each other not to get zapped or taken down by something as happenstance as bad space weather. If a CME hits us, which it will, and is particularly “concentrated” on some parts of the grid, they’re all going to be feeling that zap. Way back in 1859, the Carrington Event CME actually shocked telegraph workers and even caused some of their offices to catch fire. That was in 1859. When there were no computers or anything delicate like that. Modern transportation looked like this: 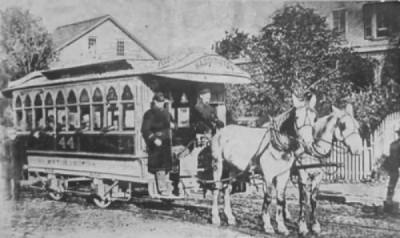 And airplanes looked like this thing, which is basically just a glider: 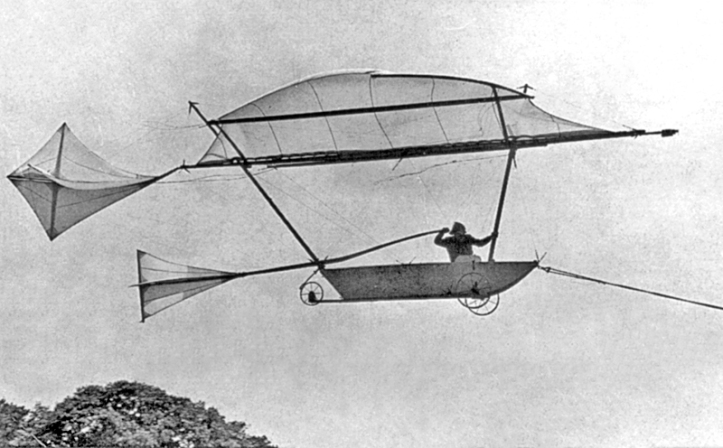 There were no nuclear submarines, reactors, or missiles; no satellites or space stations orbiting in outer space which need us to control their activities and trajectory; no bullet trains, nada. It may as well have been Little House on the Prairie-ville compared to now because our world has gotten incredibly more complicated, connected, and vulnerable. Our food often comes from other countries, and not many of us can just hang out and play cards for the year or so it will take to recover from a major CME shit storm that will, with 100% certainty, hit the Earth. In case this isn’t disturbing enough, scientists also know that our planet’s magnetic field is weakening and we’re also overdue for it to “flip,” which happens roughly every 450,000 years. The last time it happened was 786,000 years ago. The flip, which is also a certainty, has not appeared to cause mass extinction events while it was happening. But of course, there wasn’t any such thing as an electric grid, so this is important stuff. My point is that we know ENOUGH to pay more attention to what are truly existential threats. And less attention to this guy: 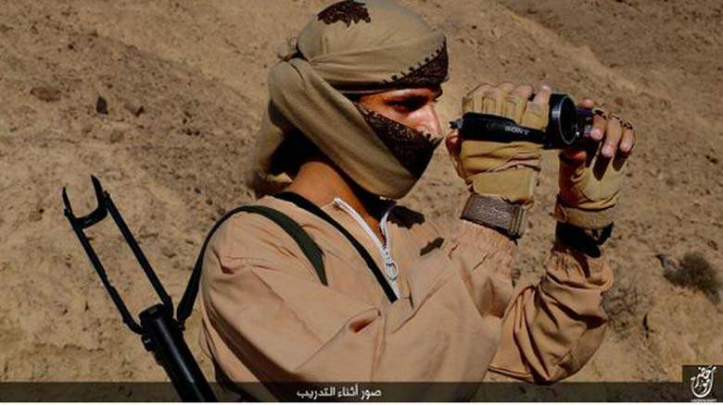 There are a couple of things we can do, and which we should be focusing more attention and money on. We need to increase our monitoring of space weather and of what our Sun is up to so that we can disconnect, and fast, portions of the grid from each other, minimizing a catastrophic cascading of grid destruction aka “bad events.” We need to silence and rid ourselves of morons like this guy, Lamar Smith, who takes pride in cutting as much science funding as possible:

And we need to harden and protect our grids to shield them from what will, with 100% certainty, occur, which is a major CME. Keep in mind that prior to pushing for the overthrow of Saddam Hussein because he supposedly had weapons of mass destruction (WMD), Dick Cheney said that any risk at all, no matter how slight, even if it was just a 1% chance that there were WMD in Iraq, was enough to justify all-out action. Of course, Cheney was a big fat liar, but I think we should put his own version of risk assessment to some good use. NASA and the scientific community, when not kept busy responding to subpoenas and generalized harassment from Congress, know what needs to be done. They monitor and plan for as many things as possible, but until the general public becomes more scientifically literate and begins reacting to existential threats which are more imminent, devastating, and far reaching, we are left with bozos like James Inhofe, telling us what we should be concerned about:

If we are unwilling or unable to decide what our real priorities as a nation should be, sell-outs like this guy will make those choices for us. That’s a risk none of us should be willing to take. 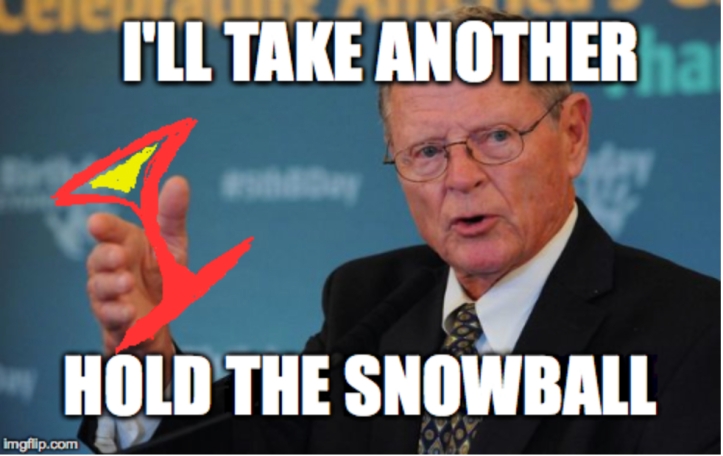