Okay, Bill McKibben (who I think is the bee’s knees, by the way), I’ll see you on Obama being a climate change denier and raise you that he’s a paid shill for the fossil fuel industry. Friendly wager, of course, because in the case of President Obama’s “real hand,” the fossil fuel industry has already won. And for those who are unfamiliar with my own political leanings, I’m a lifelong, registered Democrat, so coming to these realizations was entirely unpleasant.

So Bill McKibben’s (350.org) excellent Op-Ed piece in the New York Times makes the case that Barack Obama is not who he pretends to be: 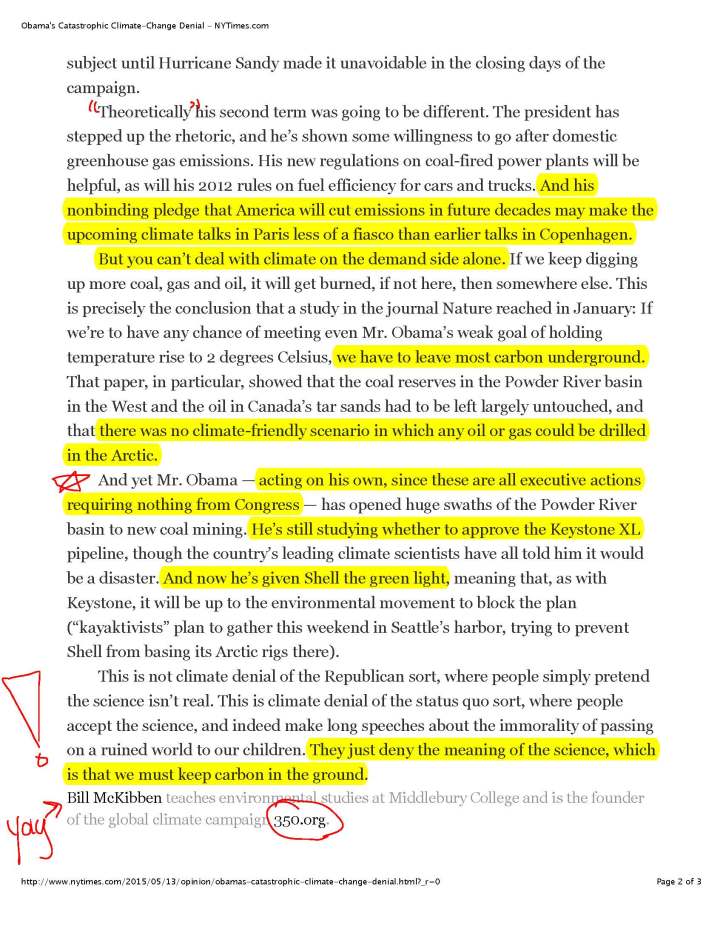 Keep in mind that all of the damage to the climate and environment that I refer to conveniently falls under the 4 most dangerous words ever spoken by President Obama (I had a contest about this last year). They are: ALL OF THE ABOVE, as in all of the above energy policy. It should have been ALL OF THE BELOW, since those four words unleashed a fossil fuel frenzy under the protective cloak of “sound” energy policy. Which it is not. To prove my point that Obama not only denies the logical consequences of extracting and burning more carbon based fuels, but enables and encourages the fossil fuel industry in their insane pursuit of these activities, I offer the following facts, in no particular order:

In 2012, President Obama bragged that in just 3 years, he had constructed enough oil and gas pipeline to circle the Earth, a statement that was verified by Politifact.com;

Mr. Obama is the biggest friend to big business in perhaps the whole of American history, leading the US to become the world’s largest producer of oil and gas AND ushering in a new corporatocracy via the Trans Pacific Partnership (TPP) that probably leaves even the Koch brothers speechless. Indeed, I’d venture a guess that “owning” a US President who is both a Democrat and who is widely considered a liberal is some kind of evil genius. Only someone like that can, under the radar, enact pro-business and pro-oil & gas policies without causing an uprising;

President Obama has created several backdoor ways for oil and gas producers to export their products onto the open market, and quite often to non-US free trade partners (it is supposed to be illegal to do so because of the 1975 oil export ban) through, among other means, the Bureau of Industry and Security (and who among us had ever heard of them before?) which is part of the Department of Commerce, and also via the Department of Energy, which has been busy expediting a VERY dodgy process allowing the export of liquified natural gas (LNG) to non-US trading partners using language that only a first grader could appreciate, and which I wrote about last December.  Those initial approvals of LNG exports, which must “be in the public’s interest” (and what could be MORE in the public’s interest than heating up the planet until we can’t live on it any longer?) are joined by this stinker of an approval for Corpus Christie Liquefaction to also export LNG, which is just part of the floodgates being opened by Barack Obama. There was also this one to Lake Charles Exports LNG, and this one to Dominion Cove Point LNG, and many other agreements for MORE exports of liquified natural gas that have been approved or are (excuse the pun), already in the pipeline for LNG export approval;

How about that real GIFT to humanity known as fracking? How’s that been going under President Obama? Swimmingly, I’d say. In fact, offshore fracking even occurs, but no one really knows how much of THAT is happening, because they’re not keeping track. Under the Obama Administration, and with the anointed participation of the Department of the Interior, the EPA, and the Department of Energy, a little gem of a clusterfuck was created called FracFocus. I have written about it several times, but suffice to say that it’s SO incredibly corrupt and so intentionally deceptive that Halliburton wrote a 42 page love letter about how fantastic it was. Love letter from Halliburton are four OTHER words which should be a red flag for most people. FracFocus is an entirely voluntary registry of what chemicals are used in fracking fluid. So, no one really knows what’s in the secret sauce. And fracking is unregulated, thanks to that other pillar of public safety, Dick Cheney, who created the Halliburton Loophole, which no one has bothered to roll back in all these years and which disables the regulation of the fracking process. So many onion layers of WRONG here. 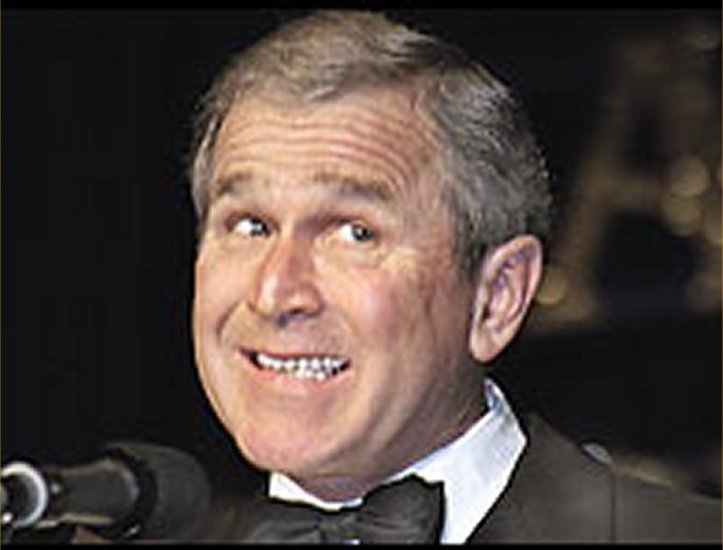 I could go on all day, but take the above damage done to the climate via the Obama Administration, and throw in increased drilling in the Arctic (which is conveniently melting), and into new waters off the east coast of the US, and NOW drillers are going back into the same spot as the 2010 Deepwater Horizon blowout, liberally sprinkle increased drilling on federal lands “overseen” by those rascals over at the Department of the Interior, and it’s like the freaking Wild West for gas and oil companies. Except the Wild West is anywhere they can find a smidge of oil or gas inside or outside the United States. 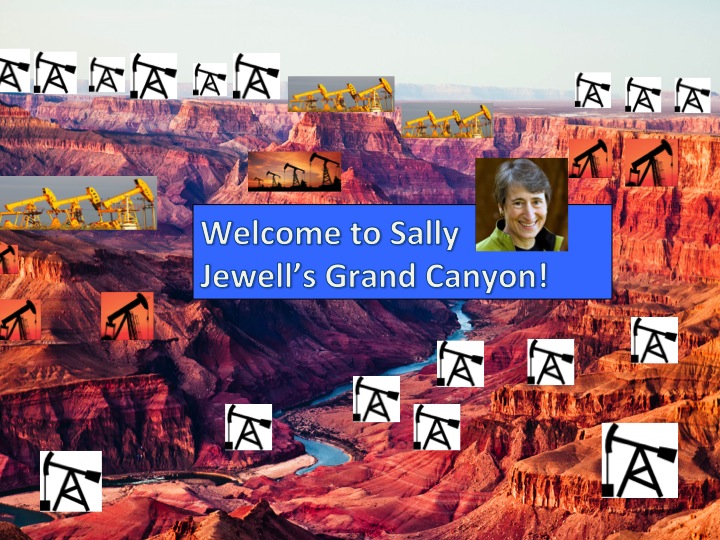 And while most Americans are scared of what a Koch brothers sponsored President might usher in (should they pick a winner) for 2016, I’m not phased at all. HOW COULD IT BE WORSE? Think of it this way: if the Kochtopuss crowns a new President, EVERYONE will know who the President’s real bosses are, and what to expect. I daresay that if Romney had won, at least most Americans would know what to expect of him, and act, or react accordingly. With a Democrat as President (and I voted for Obama twice myself), the vast majority of people had their guard down. I know that I did. Only recently, with the bizarre and ill-fitting haircloth being worn by Obama as he shoves TPP and Fast Track down our throats have people slowly woken up to the fact that we’ve all been played, EVEN (and particularly, I think) the right wing public. As long as the stage is set that Obama is liberal and that whatever he does is liberal and therefore shouldn’t harm the environment, well, who’s going to openly complain? It’s like watching the commedia dell’arte, and everyone has a role to play.

Looking at Obama’s actual record, I’m only surprised that more liberals and environmentalists haven’t sounded the alarm bells before. But why would they? We all have biases, and confirmation bias is a pretty strong force in us silly humans. People would have to consciously and with great effort work against what they think Obama SHOULD BE, love him or hate him, to see what he really is. By that time, we’ll have blown past every carbon budget ever imagined.

So, in closing, I think I “win,” except that actually we all lose.