Change must come from outside and below

As people wake up to the reality of the climate crisis and increasingly begin to question how the fossil fuel industry continues to exert its influence and stranglehold on power throughout the American political system, they need to stand back and look at the genesis of how we got “here.” From acquiring leases to drill virtually anywhere, to controlling major environmental policy regarding clean air and water, to influencing elections across the nation, Americans are realizing that this grip needs to be broken. But how, exactly, did a huge country, built on the premise of certain freedoms and guarantees, find itself seemingly held hostage to corporate interests which do not reflect the values and concerns of the general population?

I find it easier, and probably more accurate, to envision Big Energy (as I will refer to it here) sort of like a cancer cell which has managed to break through healthy immunity barriers, and enter the lymph nodes, and ultimately replicate and scatter itself throughout the bloodstream. In this case, we are talking about infiltrating and permeating virtually all levels of government, non-governmental organizations (NGO’s), and even academia…essentially any entity which may interface or get in the way of Big Energy’s primary goal which is to extract and produce fossil fuels, because without energy, literally everything grinds to a halt, and they want every last bit of it for themselves. Let me take, for example, a person who exemplifies how the tentacles of corruption and conflicts of interest reach into so many corridors of access and power. I will use John Deutch as an example, but I could just as easily use countless others to illustrate my point.

John Deutch started out as a chemistry student in college, doing the kinds of research and studies that any typical kid out of high school might do. While at Princeton (although he later transferred to MIT), he started getting his work acknowledged and published in appropriate science journals, and the energy grants, acknowledgements and support began at that point, something I like to call, “the hook.” Not really all that different from what drug dealers do to get people addicted to their products:

His proximity to and interactions with the Department of Energy began nearly 40 years ago, in 1977, and continue (and are amplified) to this very day, where he is on the prestigious and crooked Secretary of Energy Advisory Board (SEAB), which does things like oversee the creation of FracFocus.org and lots of other projects and money pits that guide the Energy Department further and further into fossil fuel laden waters where they remain. Not that they wouldn’t be there anyway. DOE Secretary Moniz and Deutch have a relationship going back literally decades.

As you can see by the above biography, Deutch has ping-ponged around many governmental agencies…Department of Energy, Department of Defense, several Presidential Advisory Boards, Department of State, he was the head of the CIA, lots of different Intelligence Advisory Boards, etc. All the while (and remember that he’s a trained chemist), he’s writing a smattering of actual chemistry papers (thanks Bill for helping me decipher the chemistry), and lots of policy papers, whose topics reflect the times he lived in. I will tell you that two of his papers, one on global warming and the other on the threat of massive terror attacks are eerily prescient. 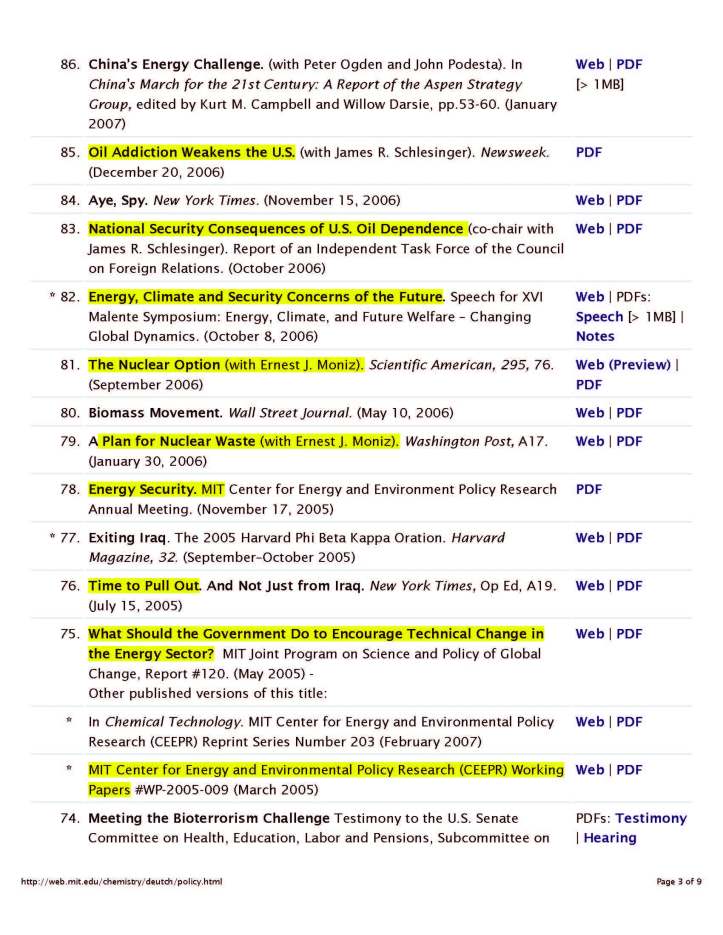 And Deutch has also worked his way onto many Boards of Directors, including some of Big Energy’s corporations. Take Schlumberger Ltd. out of Texas, for example. It is the largest oilfield services company in the world, worth $115 billion dollars (more than twice what Halliburton is worth).

So now we have a man who began his love affair with Big Energy nearly 40 years ago. He is at the intersection of business, government, politics, academia (he’s still at MIT). He has the privilege of being the head of the bully pulpit where he can spout policy recommendations (always on Big Energy’s side), he can directly impact the direction that government spending and regulatory policy take, he can advocate for defense and technology (Raytheon), financial services (Citicorp), Big Energy (Schlumberger, Chemiere, CMS Energy) and he has the ear of the President of the United States.

I find the MIT page discussing his current research interests to be particularly “telling.” I’m not sure if the person who wrote it was trying to make a point, or what. And I’ll tell you that I had wondered at the beginning of my research on Deutch whether he might have decided to pursue other topics in the twilight of his career. Clearly, it is quite the opposite. In fact, he appears to be using the CIA Director experience, as well as his own personal college experience, to recruit the next wave of sell outs:

Not that this doesn’t come at a price, but it’s not really that high because no one blinks an eye, other than those of us on the outside, looking in: 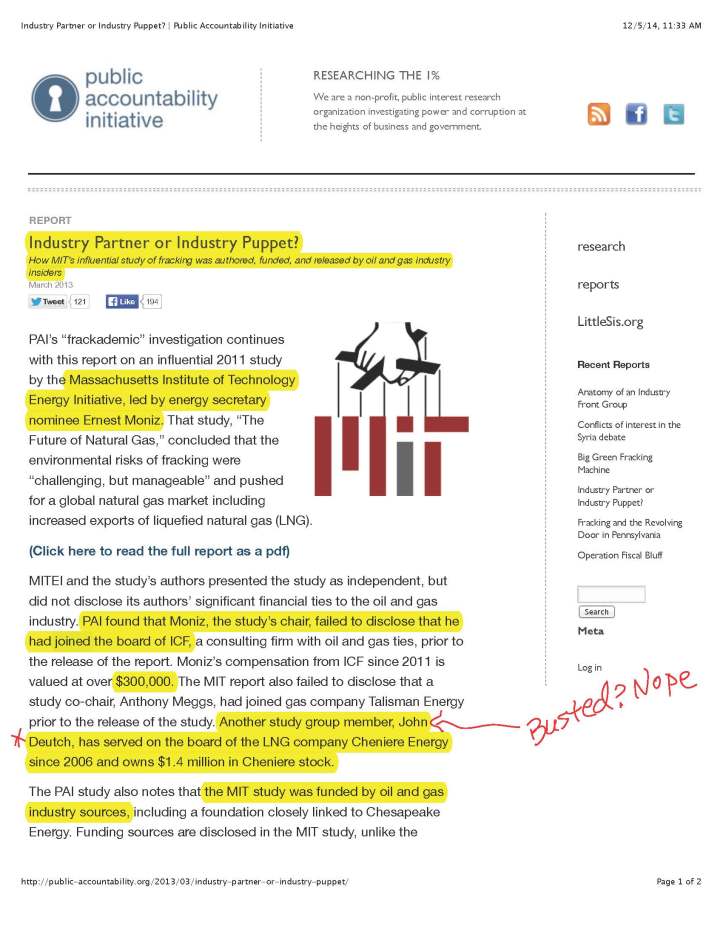 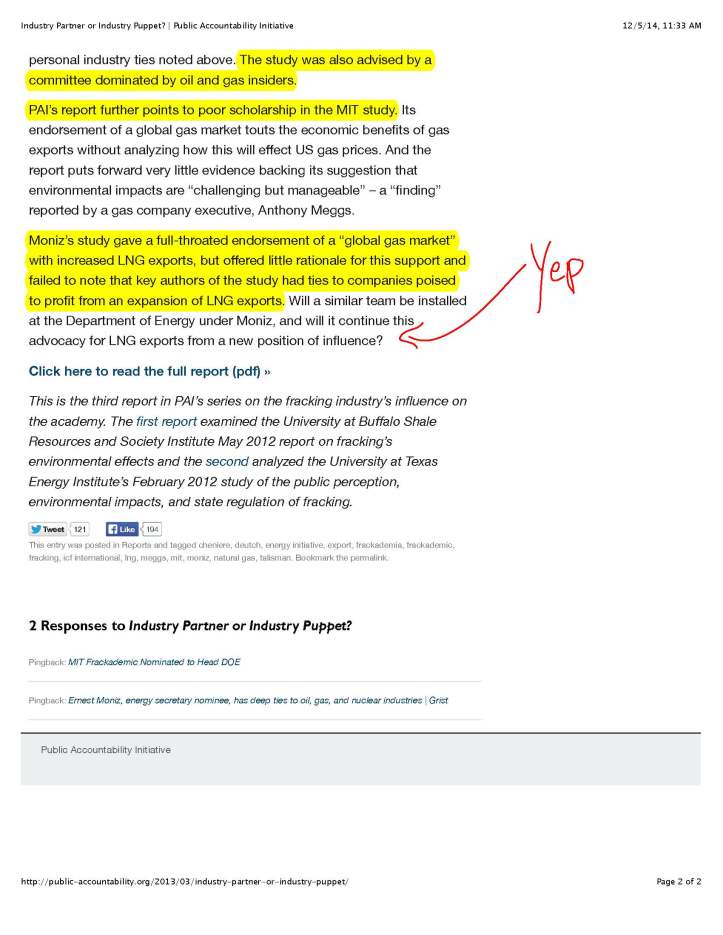 Oh, and Obama’s newly announced head of the Defense Department? 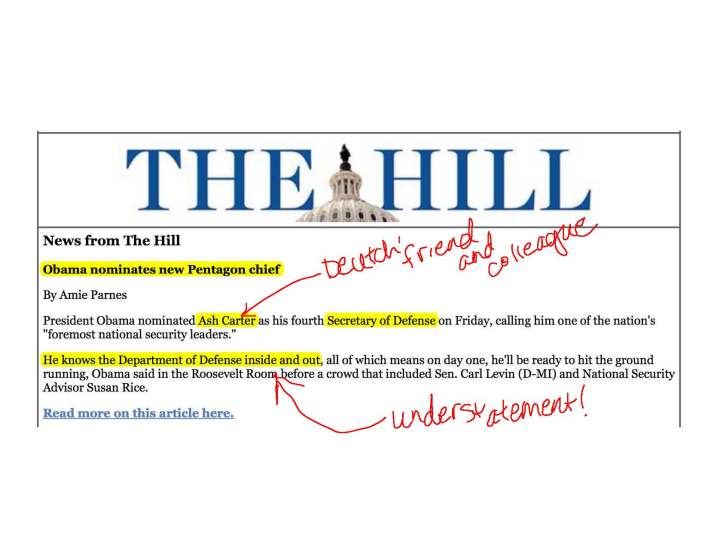 Well, let’s just say I could have written about him as well. By the way, he’s a friend, colleague, and co–author of numerous papers with Deutch. Both work with the Belfer Center at Harvard.

So, who do you think we could even LOCATE with similar background, influence and connections for the green and environmental movement? I really cannot think of one person. It would have to be someone that had been similarly groomed from the beginning of their college career and would have become an insider in the field of, well, what would it even be? Conservation? Renewables? Environmentalism? There is no such grooming that has been done or is even imagined, as far as I can tell. If there were, that person or those people would be guiding policy, regulations, funding, literally everything, in their direction. That just doesn’t even exist in our nation.

That is why change isn’t going to come from the Executive Branch or anywhere else in our government. It isn’t going to come from corporations, either. Our legal system (as in the tobacco settlement)? Not likely to happen in time to reverse climate change. There isn’t a “Deutch” for the green movement. To add fuel to that fire (excuse the pun), there isn’t just one “Deutch” in Big Energy’s arsenal. There is a veritable army of them. Real and substantive change simply must come from “outside” and “below.” Or we’re cooked.