How to take a shower with a bottle of water

Step One: Hold bottle in one hand (it’s too tiny to require 2 hands);

Step Two: Be thoroughly undressed and ready to make use of every drop because it won’t last long;

You can’t take a shower with a bottle of water. You can’t do laundry with it, or cook a meal with it, or wash the dishes with it, or do much of anything with it except take a few sips.

If anyone in America thinks for one second that our government or our military or anyone has you “covered” in times of need, you need to go out to your garage, find a hammer and whack yourself in the head, because you’re clearly half-asleep. We’re talking about a year and half of the folks in Flint, Michigan drinking, cooking, and relying on poison, dangerous water full of lead thanks to Governor Rick “Just Relax” Snyder, and THIS is the best our collective leadership can muster:

All I can say is WHAT THE FUCK????  Are we as a nation at the mercy of the Keystone Cops or something? I guarantee you that if Dick Cheney was in charge of this operation and he suspected that there was even half a buck for Halliburton to make on this gig, this is what would be behind every home in Flint (it’s one of those water bladders and it holds a LOT of water):

Of course, then we’d all have to be dealing with this Satanic bag of bones again… 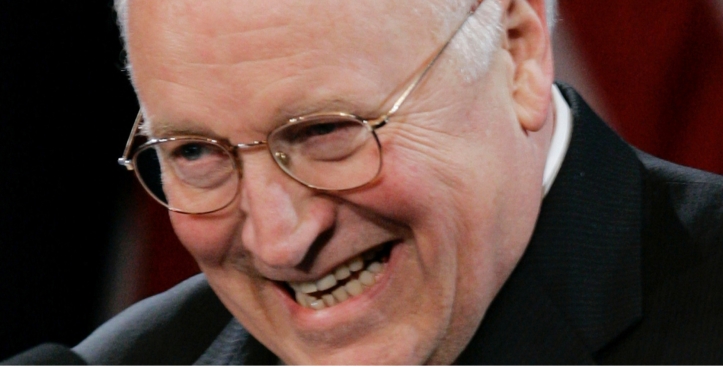 The bottom line is that our bloated, ginormous military, the most expensive and well-funded war machine on Earth, CAN be used for domestic purposes. And they totally know how to plop water down anywhere it’s needed at a moment’s notice. Perhaps someone in charge (assuming that someone is in charge) needs to talk to someone over at the Pentagon. Hell, there’s even a ton of information located all over that fancy new contraption called the Internet, such as this paper from way back in 1990 that talks about getting water to remote places. It took me less than 30 seconds to find this paper and a few minutes to skim it for pertinent information. So what’s FEMA’s excuse?

HOW completely worthless are our elected officials, anyway? I frankly don’t care about the State of the Union when PART of that Union is gulping down poisonous water and trying to make do with only THIS (if they’re lucky) for a year and a half:

Jef Bush’s campaign for president has spent something like $50 million dollars on trying to get his unelectable ass into the White House. People hang on every word that comes out of Trump’s pie hole. How many standing ovations took place during Obama’s recent speech? And as I write this, ALL of those creased Brooks Brothers suits are at the dry cleaners getting cleaned and pressed. Meanwhile, babies, children, the elderly, pregnant women and anyone who requires water to survive (so all the rest of the residents in Flint) are left for dead, literally.

If you are NOT in Flint, and therefore not dealing with a terrifying, life-threatening situation, please Tweet, post, email, call FEMA, Congress, the National Guard, hell, even Dick Cheney who can, after all, get stuff done, and demand that we bring our fellow Americans and fellow human beings up to at least the standard of prisoners.