What we’re up against: Example #2 “The Climate Fraudster”

I know. What kind of ridiculous term is “Climate Fraudster?” It sounds like some green hybrid of “gangster,” and “hipster.”  I’m using it here because the person who I would simply call a liar and a fraud uses the term “Climate Fraudster” when he refers to any real scientist, which he clearly is not. His websites are hilariously called, “Real Science,” and “Real Climate Science,” which means nothing. I could call my website Master of the Universe and it doesn’t mean I am an actual Master of the Universe.

So, Steven Goddard, devoting the few neurons he’s got (his actual name is Tony Heller), runs those websites, which then feed a load of bullshit to other climate change deniers (like Marc Morano who runs Climate Depot), slandering and insulting (actual) climate scientists like James Hansen and Michael Mann, along with NASA, NOAA, Elon Musk, Al Gore, etc. Goddard/Heller viciously mocks and accuses climate scientists of every sort of intellectual crime and skullduggery, especially “cherry picking” the data, which HE blatantly does on virtually every post. It’s a con game, from start to finish.

Take a look what he wrote on his “Real Science” blog about how Arctic sea ice is actually growing:

Let me point out something that caught my eye. He put THIS altered graphic (which is above and which I’ve enlarged below) at the top of his post, supposedly proving, well, nothing. He thinks he’s fooling someone into believing that there’s been a huge gain (“hundreds of miles”) of Arctic ice and that all those (real) scientists who say that the Arctic is melting are a) liars, b) fraudsters, c) stupid, d) crooks when it’s actually HIM who is e) all of the above. He’s deliberately altered it. This is what he posted, and notice the writing at the top and bottom of the graphic where it says, “Sea Ice Extent” and “median” – the overlay/color he added has bled onto the words: 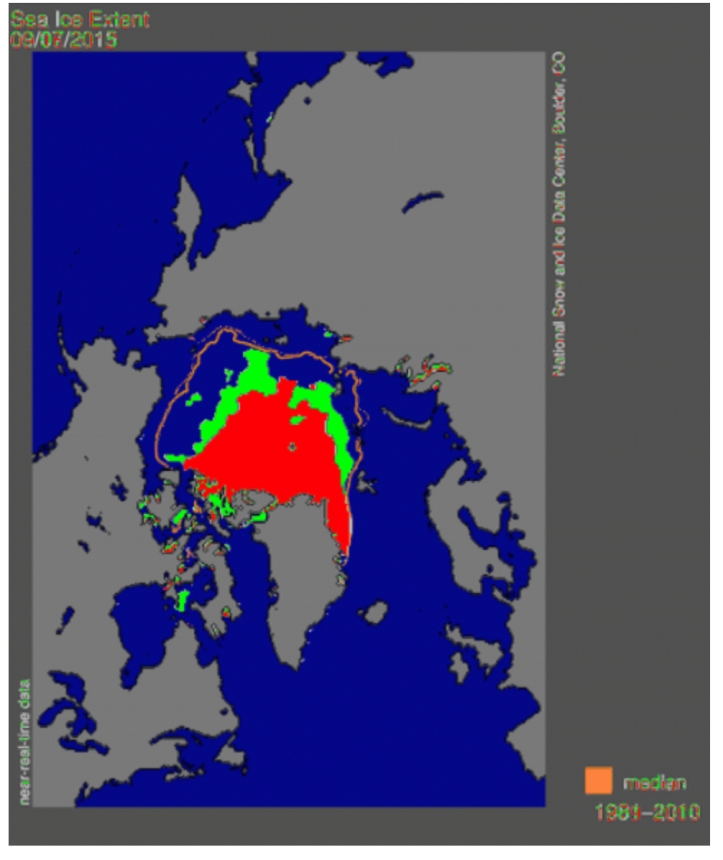 And this is what actually appeared on the National Snow and Ice Data Center (NSIDC) website (they are funded by NASA, the National Science Foundation and NOAA):

The helpful folks at NSIDC were kind enough to send me their original graphic from September 7, 2015 since they don’t store them on their website, which, of course, Steven Goddard/Tony Heller knew, and he was counting on. Which reminds me…hey, Steven Goddard/Tony Heller, they don’t appreciate you messing with their images, falsifying data and misrepresenting the facts, dude. I’ll let them deal with you, though.

Why did this Climate Fraudster choose to color code the September 7, 2015 graphic and compare it to September 16, 2012, in particular? It was not done arbitrarily, that’s for sure.  NSIDC was, once again, kind enough to send me one of their helpful illustrations which shows why the Climate Fraudster carefully chose just about the lowest point on this graph below (there was one other lower day, but he probably missed it):

to then compare to September 7, 2015. And for someone who just loves to accuse people of “cherry picking,” the data, this is truly the pot calling the kettle black. He very carefully chose the starkest example of what he’s trying to convince people of, which is his claim that the Arctic is NOT melting due to a warming planet, but instead, it’s gaining sea ice. This is a huge act of deliberate deception on his part. I point this out because there are environmental groups actively building a case for fraud and deception by people like Marc Morano and this Goddard/Heller guy, who fully understand what they’re doing which is deliberately deceiving the public about climate change. It’s sort of the ugly flip side to yelling “FIRE” in a crowded movie theatre (when there is no fire), legally speaking. And if these denier shills think for one second that the likes of Senator James “Snowball Chucker” Inhofe won’t throw them directly under the bus for misleading everyone when the shit hits the fan (which hopefully happens before the methane hits the fan), then they’re fooling themselves. There is no such thing as honor among thieves. They’ll be tripping over each other to cut a deal.

1) I know this can be confusing, and I’m trying to explain the “con” played out here in the simplest way possible. So, if you’re wondering if there WAS a lot of ice growth from that EXACT date of September 16, 2012 when compared to September 7, 2015, the answer is “yes.” But it doesn’t mean the Arctic isn’t melting to one big slushy before our eyes. First of all, imagine that you have glass of water that is totally full. Then you empty it out. That would represent September 16, 2012. Now, anything you add to that glass is going to APPEAR to be a lot, right?

Here is another NSIDC graph providing a longer and much more representative snapshot of Arctic sea ice (notice the drop at 2012): 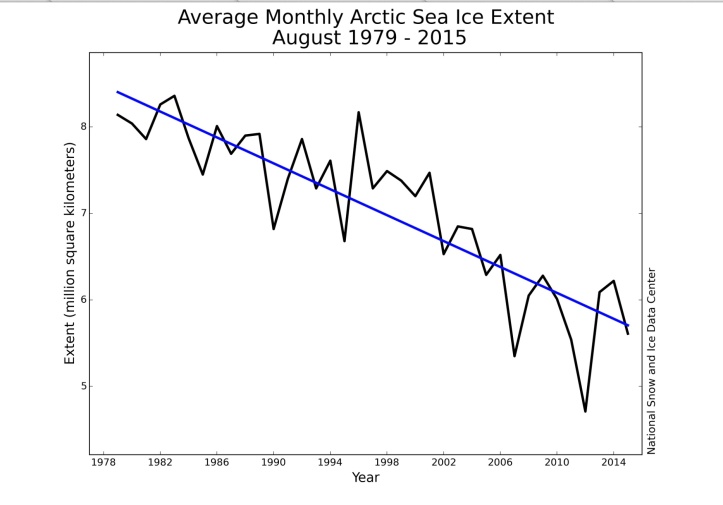 2) The Climate Fraudster goes on and on ad infinitum about NASA’s “world class fraud” in only using measurements dating back to 1979, prattling on that if they’d JUST included a few years prior to 1979, it would be obvious that there is no decline and the whole climate change theory could be debunked. The fraudster rants endlessly that THIS omission of anything before 1979 is solid proof that they’re lying. Again, he is barking up the wrong scientific tree and he knows it. The actual reason the datasets only go back to 1979 is because THAT is when we started to have reliable satellite data:

3) And Goddard/Heller Climate Fraudster extraordinaire must have got some sort of free subscription to the vault of old newspaper articles from yesteryear because he uses them constantly to “prove” that the climate is not heating up. So, based on some news story from a hundred years ago, as reported by some long-dead reporter, we get this entirely non-scientific load of utter nonsense as proof that all the real climate scientists all over the world today are dead wrong. I wonder how long before he posts the back of envelopes containing scribbles by anonymous idiots “disproving” climate scientists?

or this, which proves…nothing. By the way, weather and climate are not the same thing.

This guy would be a joke, unworthy of even mentioning except that, literally, our lives depend on people understanding some basic level of the science behind climate change. When you factor in that whatever this Climate Fraudster posts will get recirculated by  OTHER Climate Fraudsters like Marc Morano (indeed, he quickly reposted Goddard/Heller’s nonsense on his Climate Depot website which is screenshot below):

then, at that point these mere con artists become more than just pranksters. They become common criminals. And I, for one, can’t wait to see the mugshots.