For those who may have missed the memo, the 21st century equivalent of a Gold Rush continues unabated here in the US. It’s called the Shale Revolution, made possible by hydraulic fracturing, also known as fracking. Unlike the first Gold Rush in California, this one’s impact reaches out in lethal, toxic tentacles across the entire country, with nearly 20 million Americans living within 1 mile of a fracking well site. In its wake are regulatory lapses in judgment and in permitting, along with negligence and harm perpetrated on a massive scale to not only humans, but also on the environment. Indeed, in retrospect, future generations will look back at the trail of destruction left behind by financially and morally bankrupt oil and gas companies and wonder what the hell were we thinking? 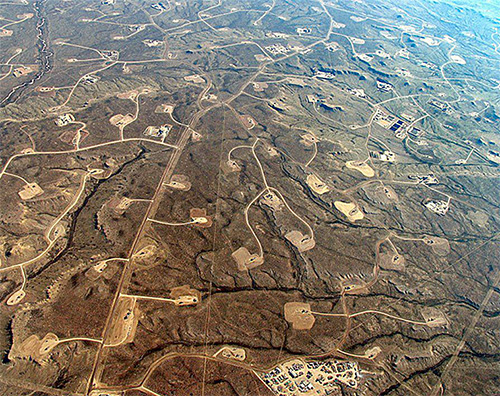 Massive groundwater contamination, fracking-induced earthquakes, radioactive and chemical toxicity in air, water, and soil samples, and what will surely become obvious in the decades to come: spikes in cancers and other illnesses caused by widespread poisoning of the natural world. However, by the time the American public wakes up to the mess left behind, as always, by the oil and gas industry, they will be long gone, leaving taxpayers to deal with abandoned mines, polluted waterways, criminally scarce supplies of fresh water and plenty of blame to spread around. For these reasons, I strongly believe that criminal prosecution of those responsible should be undertaken and it should be very aggressive, continuous, and far-reaching, beginning with the lowest level conspirators and ending with the heaviest hitters who can be found slithering across the halls of Congress and the White House.

Somewhere in between the littlest and biggest fish to be fried are people like former Pennsylvania Governors Edward Rendell (Democrat) who was succeeded by Republican Tom Corbett. Rendell, who opened the door to inadequately regulated fracking in Pennsylvania, later went on to shill for the oil and gas industry, including the notoriously corrupt company, Range Resources. You may remember them as the company who suggested that the general public be treated like enemy insurgents if they should oppose fracking in any way. They’re also the ones who tried to enforce a gag rule on a family including two small children which would have prevented them from speaking about fracking for the rest of their lives.

In January 2013, at the direction of then-Governor Tom Corbett (who should be reclassified as a wholly owned subsidiary of the fracking industry), the Pennsylvania Department of Environmental Protection (DEP) began studying radioactivity related to the fracking process in Pennsylvania. The final report, which was issued in January 2015, is damning to the oil and gas industry. And as Forbes contributor, and stalwart defender of the fossil fuel industry, James Conca said (after clearly reading ONLY the press release about the DEP report):

It should be pointed out that these study results most likely apply to all fracking and drilling activities across the United States since Pennsylvania has some of the most radioactive source rocks in the country.

Fine. I agree. The results of the DEP report should apply to drilling activities across the United States even though their crappy report is riddled with simple math errors, has too small a sampling size, and is lacking even minimally qualified peer reviewers. Nonetheless, and in spite of their best intentions to make the least user-friendly report possible, it’s child’s play to see ridiculously elevated radiation levels in not only fracking wastewater, drill cuttings, and waste treatment facilities, but also all along the brine-strewn roads traveled by trucks carrying materials used for fracking.  There is a plethora of other radioactive contaminants released from the beginning to the end of the process including radioactive exposure to those who use the fracked natural gas in their homes. The supposedly peer-reviewed study (again, it is NOT peer-reviewed) is anything but scientifically sound, and yet, then-Governor Corbett lauded the results as proof of some sort of benevolent relationship between Industry and environment. In fact, if one were to spend the dozens of hours necessary to read through the report, including the 12 appendices, it becomes obvious that the DEP either did not read their own report, or they are betting no one else did.

Take for example, section 6 of the DEP report, titled “Gas distribution and end use.” It’s not only inadequate, but their simple math is just plain wrong…

This section is SO bad that it’s almost laughable. Let’s put it this way: if I were living in Pennsylvania and I was anything other than a middle-aged male miner (yes, someone who works in a mine), and I used natural gas derived from the fracking process, I would make sure that I had very good health insurance, a life insurance policy with a good payout, and no children who would also become sick. As in many other sections of this report, as I’ve just shown, the math is wrong which to me is just a symptom of an inherently bad report.

First of all, there are only 16 sites being tested out of potentially thousands of candidate sites. This seems reckless and irresponsible considering that people’s lives are literally at stake. Second of all, they are basing their measurements on a middle aged man (they use miners) who not only work full-time (so they are out of the house much of the day) but then, on top of working full-time, they are ALSO only home 70% of what’s left of the time. Even if we are talking about a grown man who works a full-time job AND then is only home 70% of the time, that hardly applies to most people. What about children? What about babies? And what about senior citizens who spend more time at home? What about pregnant mothers, or stay-at-home moms with children? My point here is that everyone who uses natural gas in their homes or at their place of work does not fit the profile of a middle-aged man, working full-time, who is then out of the home (or building) for a significant amount of time additionally. The DEP report, section 6 is seriously and inherently flawed, dangerous and misleading. This clearly wrong assessment for exposure to radiation from using natural gas (obtained through the fracking process) which is used in the home or place of work is deliberate, methodical and should be criminal.

I’ve already shown that their math is wrong, and not only in that section, but throughout the report. When I make corrections for their errors, I get a range of exposure to radiation in the home from 1,210 mrem/year to 4,320 mrem/year which is clearly outside the range of the 100 mrem/year considered safe for humans to absorb per year from ALL sources. I think that section 6 and its conclusions may have been a surprise, or, at least not an intended result, for several reasons. One thing that leads me to suspect something is dodgy is contained within the range of the reviewers comments. They do not deal with section 6 at all. In fact, one of them says they didn’t even have the whole thing to review. In this case, such a comment along with this and other omissions, is noteworthy.

And look, for example, at these two photos from the DEP report’s Appendix H.

First of all, please keep in mind that much of the radiation data wasn’t EVER supposed to be released to the public. The Pennsylvania Department for Environmental Protection was sued and forced to release the information. As you can see from the two screenshots I’ve attached above, which look like someone drew on them by hand (I didn’t do this, by the way  – this kindergarten-looking coloring job was done by the paid consultants who performed the DEP study), radiation levels around waste treatment facilities are obscenely high. For a multibillion-dollar industry, it seems to me that coloring the dangerous areas by hand with a highlighter is extremely unprofessional, dishonest, deliberately misleading, and/or moronic. Nonetheless, even the Keystone Cop attempt at obfuscation can’t hide the fact that anywhere that materials, equipment or byproducts of fracked natural gas exist, radiation levels are high. And when considering the results of other (real) studies coming out of Pennsylvania, when coupled with the information contained even within this stupid report, the general public should have been notified that using fracked natural gas is dangerous. And working around any site, either specific or ancillary to this industry is also dangerous.

It cannot be a surprise that leadership which is hell-bent on protecting an industry that makes them rich absolutely cannot be responsible to police itself. It’s not for me, even a non-scientist who is able to see the errors here, to point out the obvious. And it is clearly not for regulators in Pennsylvania to get another bite at the apple. And when you consider that the shale industry uses this ridiculous DEP report to refute valid and important scientific research, I strongly feel that nothing short of criminal prosecution is appropriate. Put another way, if I were living in an apartment, pregnant and caring for my toddler and I was using natural gas in my home and it was making me sick, unbeknownst to me, and harming both my fetus and my child, there would be hell to pay.

Why isn’t there hell to pay?