Isabel dos Santos: The most cold-hearted bitch on Earth (Part I)

Some people are just really easy to dislike. Maybe you find them distasteful to look at, but then you learn about the rotten things they’ve done, and you might even grow to hate them.

These people are so unlikable that if they were to suddenly admit every bad deed and apologize and do community service for life, they’d still be despicable…

Or maybe Rex Tillerson (ExxonMobil), or Governor Chris “I love to torture pregnant pigs” Christie, or, of course, this putrid duo, the Koch brothers. 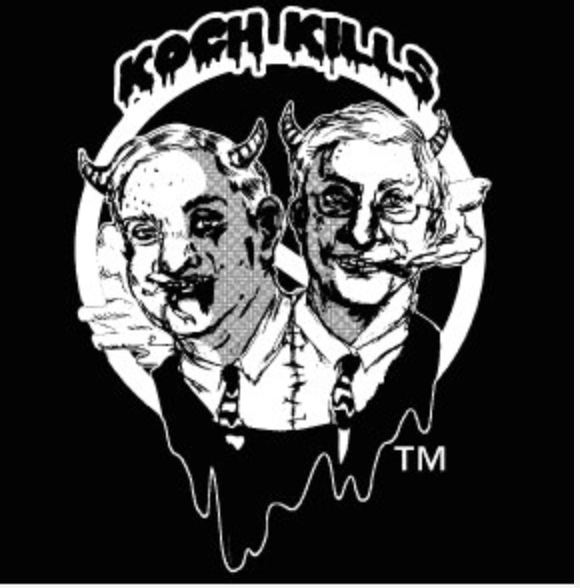 There are even a few buffoons who do awful things (which they know are wrong) and YET, they are still just a tiny bit charming, even entertaining. You’d even, perhaps, find it fun to sit and have a drink with them. Just once. Like John Boehner, or this guy, Christopher Monckton…

Then there are people who are so incredibly stupid that you can almost forgive them for their bad behavior except that they also happen to be in a position of power, which means that they’re actually quite dangerous (George W. Bush and James “Snowball Chucker” Inhofe are a few examples).

I’d now like to make a distinction between all the other kinds of horrible, cruel, bad people, some of whom are already on my Wall of Shame, compared to new Wall of Shame inductee, Isabel dos Santos because she and her despicable ilk are truly in a class by themselves. This class would consist of the absolute worst, most despicable characters in human history. Let me put it this way: Dick Cheney might authorize the torture of political prisoners (rectal feeding – ew) based on some bizarre pseudo-morality which presupposes that his country/family/golf course are being threatened. Isabel dos Santos and her family don’t even feign such a dubious ‘high ground.”

A little background. Isabel dos Santos is the 40 year old daughter of Angolan President Jose Eduardo dos Santos. She was born in Baku, Azerbaijan to a Russian-born mother (Tatiana Kukanova) while her father was there on a study abroad program. She has a Bachelor’s degree in engineering from King’s College (London) where she met her future husband, Sindika Dokolo, who is from the Democratic Republic of Congo. They married in Luanda, Angola in 2002 during a ceremony which clearly foreshadowed some of the obscene riches in her future. They have 3 children. This is where the acknowledgement of her humanness ends when discussing Isabel dos Santos.

The more compelling story is about Angola. This oil and diamond-rich (blood diamonds) former Portuguese colony in southern Africa acquired independence in 1975. At that juncture, a 27 year long civil war began, which killed hundreds of thousands of innocent civilians, decimated the economy and launched a brutal, corrupt, and inbred kleptocracy headed by Isabel dos Santos father, Jose Eduardo who has been Angola’s President for 35 years. Despite the fact that Angola is the 2nd biggest producer and exporter of crude oil, receiving BILLIONS of dollars in annual revenue for it’s oil, gas, uranium, diamonds, etc., Angola has the highest infant mortality rate (under 5 years old) in the world, with 1 in 6 children dying before their 5th birthday. Two-thirds of the country is starving, well below the poverty line, barely surviving on less than $2 a day. In just one year (2012) for example, the International Monetary Fund found that $4.2 billion dollars linked to the state owned oil company, Sonangol had simply vanished. That amount, by the way, far surpasses the entire annual public health budget.

Where did it go? Where does it go, is the more appropriate question.

In 2013, Forbes magazine “outed” Isabel dos Santos as the richest woman in Africa during a damning investigation (and, as any corrupt African dictator and his family would then do, they tried to buy up all the different ways such information might reach Angola). In fact, she was the only female billionaire in Africa and the youngest billionaire in Africa. And Forbes didn’t pull any punches, flatly saying that her wealth is from oil, the communication industry, natural resource extraction, etc. funds diverted to her by her father. So blatant, so rampant and so easy to figure out, right? It almost seems cliche′, like a TV commercial with a starving, emaciated toddler staring up at us from the dust. 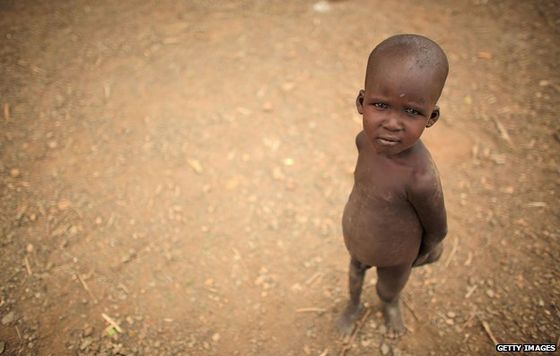 Or how about this?

But, hey, sometimes they SMILE, so they must be okay, right?

No, They are not okay. Not by a long shot. Keep in mind that Isabel dos Santos is surrounded by the most horrific scenes of human-induced misery like this every day (if she weren’t too much of a coward to bother to look):

And yet, this cold hearted bitch continues to plunder, along with her worthless, low-life clan of common thieves, every bit of Angola’s wealth which SHOULD BE going towards lifting the population out of abject misery.

I’m going to excerpt a clip from an incredible article by Nicholas Kristof about Isabel dos Santos (being compared to an average Angolan woman) below:

The other woman, more typical, is Delfina Fernandes, and I met her at the end of a bone-rattling journey over impossibly rutted dirt roads in a village called Kibanga in the northern part of the country. Blind in one eye, she lives in a grass-roof hut without electricity or running water, and without access to health care. Fernandes unrolled a homemade mat of straw on the ground and sat beside me there, telling me that she had lost 10 children (her neighbor, Ana Luciano, who had lost only four children and has a fifth now sick with malaria, said that sounded right). Perhaps the most excruciating blow a parent can suffer is to lose a child, and that has happened 10 times to Fernandes.

It’s impossible to be sure how her children died because, like half the country’s population, the family is beyond the orbit of the health care system. Therefore, her children never received birth certificates or death certificates. Yet a good guess is that they succumbed to malaria and malnutrition. In all, Fernandes, 50, says she had 15 children, of whom five survive. She had never heard of family planning, like other women I spoke to along the road, and, in any case, none is available in rural areas here.

For people like Fernandes, life isn’t that different from a few hundred years ago. There is no school in this area, so she and everyone else nearby is illiterate. Several villagers I talked to had never heard of the United States or Barack Obama, couldn’t recognize a single letter and had no idea that mosquitoes cause malaria. “Fifty percent of Angolans live outside the orbit of any health care,” noted Dr. Stephen Foster, an American surgeon who runs a rural hospital near Lubango. “They’re still getting what the traditional healer would have given them if they’d come by in the 17th century.”

Fernandes was gracious and hospitable — and also stoical. She never complained, and only when I asked about her rotting, disintegrating teeth did she acknowledge that she has lost so many teeth that she has trouble eating. She said she suffers relentless dental pain, and that the only relief from the agony comes when she is asleep. She gave no sign of anger at the government, and when I probed to see whom she blamed for her suffering, she said mildly: “It’s God who takes my children.”

That may be a little unfair to God. An International Monetary Fund report last year noted that Angola has one of the richest pools of natural wealth per person in Africa, yet the country has done much less than its peers to assist ordinary people. And when the I.M.F. reviewed Angola’s books from 2007-10, it initially found $32 billion missing. Angola is ranked 161 out of 175 countries by Transparency International in its “corruption perceptions index.” The World Bank’s “Doing Business” series ranks Angola 187 out of 189 countries in enforcing contracts.

The differences between dos Santos and Fernandes are vast, but there is a wrenching shared interest in the oil industry. Dos Santos has monetized it, and when I asked Fernandes if she knew that Angola was rich with oil she was a bit confused by the question but said eagerly that she, too, values gasoline when she can afford to buy a swallow.

Here is a link to Nicholas Kristof’s full New York Times article, which I highly recommend.

And you may be wondering what on Earth does this have to do with me, you, climate change, America, whatever. Or you may be thinking, “yeah, this is horrible, but what can I do about it?” This is complicated and too much to put into a single post, so I hope you’ll stay tuned. Suffice to say that it does not require sending money or anything like that. One very, ridiculously simple piece in the puzzle to (help) solve this problem, indeed, to helping the Angolan people themselves (and other nations suffering from the “resource curse”) reverse this government-sanctioned wholesale looting lies entirely within American borders. In fact, 90% of the work has already been done.

I, for one, want to help the people who must live like this: 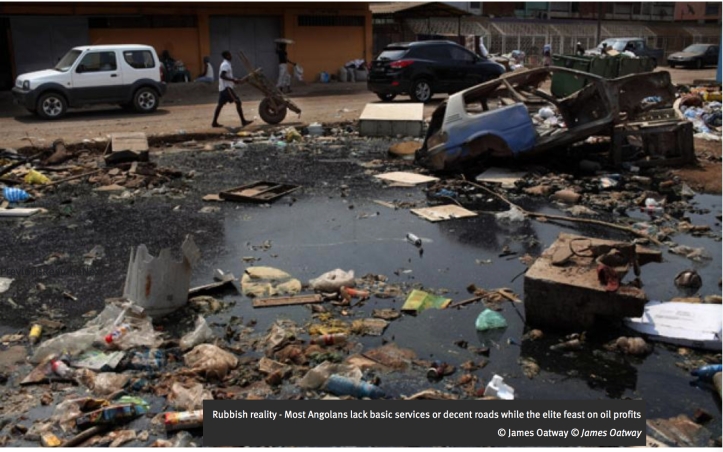 put the people who live like this (at their expense):

Where they belong. Which are the gallows.