It must have been painful beyond words for the US Department of Energy to put this report on the front page of their website.  The DOE is staffed, literally from top to bottom, with fossil fuel industry hacks. And this report, about the amazing achievements, capabilities, and technological readiness of wind power is so promising, that Bobblehead Moniz must feel like he’s being forced to give himself an enema on national television.

Indeed, this is a vine of his initial response to President Obama mentioning the promise of wind and other renewable energies (during the State of the Union address):

Here is an annotated version of DOE’s announcement. And if the pages appear too small to easily see, one of my readers suggested that you double click on the image to make it larger: 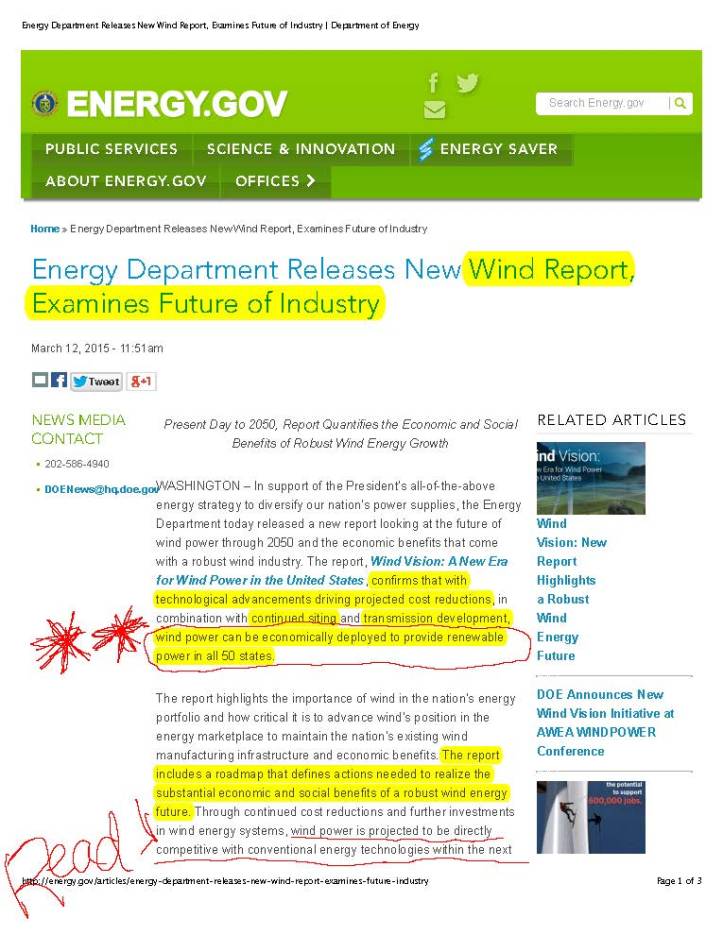 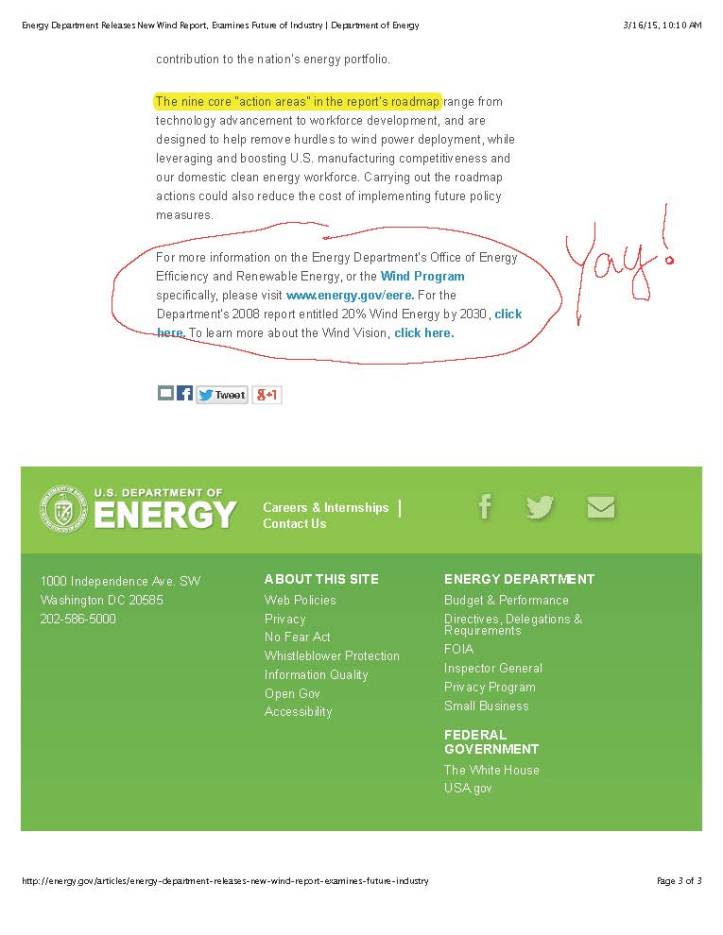 And here is the actual Department of Energy report. As you can see, just the JOBS component SHOULD, for all intents and purposes, shut up elected officials about ANY possible “downside,” although you can’t foresee the depth of Congress’ stupidity or how they might manage to tie themselves up in knots trying to debunk it. But, of course, as even my kids can see, the lunatic rantings by politicians wanting to build an oil pipeline that can sustain less than three dozen jobs per year (after the initial one year job growth of under 4,000 full time positions) has absolutely nothing to do with a) jobs, b) the price of oil, c) the environment, d) anything other than making the Koch brothers richer.

Dear readers, I can’t overstate how important it is to share this information. That is the only thing that will keep it “safe” from being buried in the dustheap of previous brilliant solutions. And please don’t just hit the share button. Take the time, when you can, to actually read the DOE report. It is long, and I haven’t finished it yet myself, but by understanding how the steps are laid out and how they can be taken, on a state-by-state basis, you empower yourself and those around you, to fight for something that can literally save the planet. By sharing, again and again, on other websites, across different platforms, and in comment sections far and wide, at some point, even the completely lame “arguments” in favor of fossil fuels starts to sound downright crazy and embarrassing.

And, make no mistake about it, it’s going to be a “photo finish.” A race to see which wins out…renewable energy and a start towards reversing the damage we’ve done vs. the fossil fuel industry, led here in the United States by the Koch brothers. And they know it.

Once the race is decided, and it will be, in large part, won or lost thanks to social media being able to raise awareness about what’s going on behind the scenes (and particularly before the next US Presidential election, which the Koch brothers plan on winning), then we must somehow find ways to keep renewables out of the hands of the oligarchs. This part troubles me because I don’t know how that can be prevented. If they “own,” solar, wind, geothermal, etc., they will somehow find a way to ruin it and/or make it so expensive for all of us, even though it occurs naturally and without any effort on their part. We do NOT want to be back where we started.  Of THIS, I am certain.