“We’ve binged to the edge of our own destruction.”

This piece in The Guardian is very good and very important, without question.  The groundwork for this report was laid, to the best of my knowledge, by the Carbon Tracker Initiative. Their website is really incredible. Additionally, Bill McKibben has written about this issue, and Naomi Klein wrote about the problem of “stranded assets” (fossil fuels which must be left in the ground) extensively in her book, “This Changes Everything.” 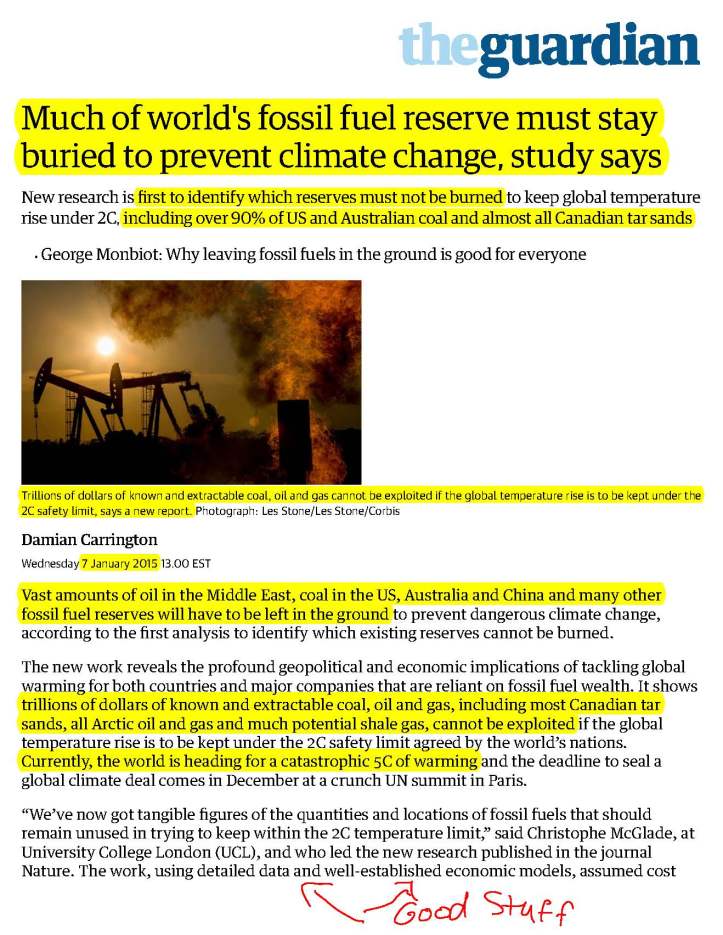 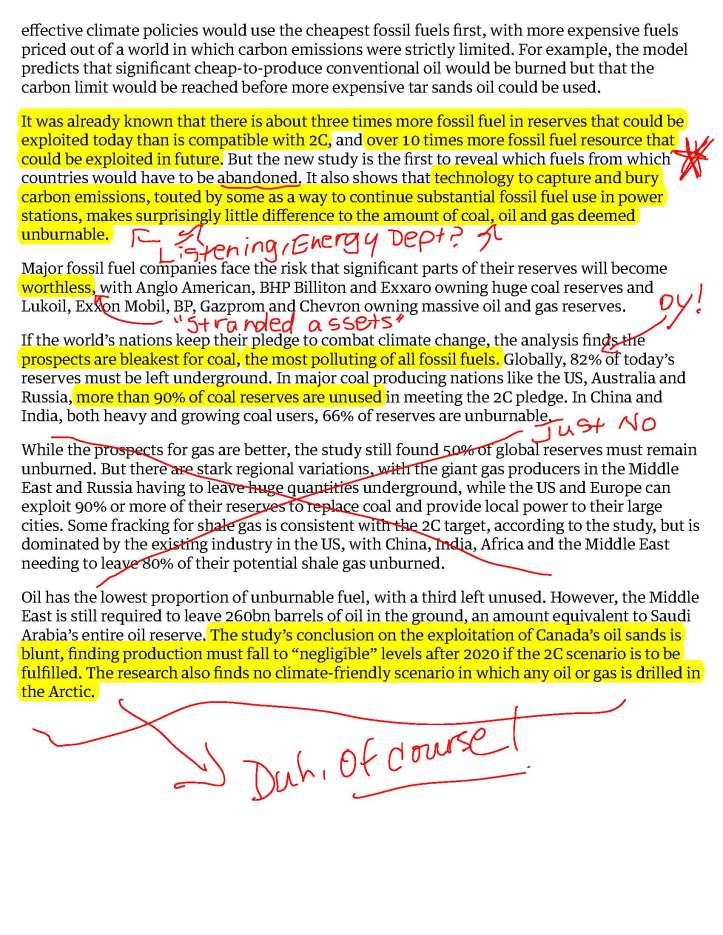 The intersection where A) these carbon based fossil fuels MUST be left in the ground, collides with B) the fiduciary duty of fossil fuel Boards of Directors to extract, refine and sell every last drop of dirty energy CANNOT lead us down the dark tunnel of C) we the people keep asking ever so nicely for them to knock it off, getting slightly louder with each dire prediction (“pretty please,with a cherry on top, Mr. Tillerson?”) until we have to cash them out, armed with truckloads of currency, in order to appease them. No. This is not the path of least resistance. There is absolutely NO justice in any part of that equation. In case anyone missed what Royal Dutch Shell has been up to in the Niger Delta for half a century, just Google “Shell,” “Niger Delta” “pollution,” “sickness,” etc. and go to “images.” It’s a real life horror story for those poor people. They are literally being MURDERED for fucking Shell Oil. Let me restate this: innocent, poor and defenseless people are DYING for Shell Oil. 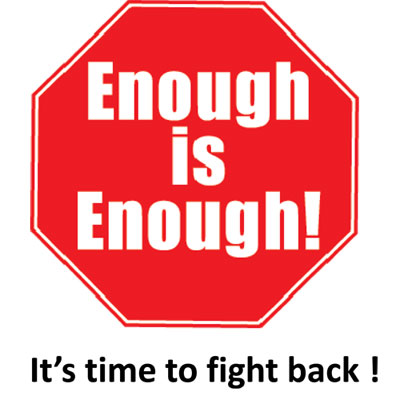 The drum beat is getting louder with each passing month, and if you don’t think that Big Oil isn’t preparing its exit strategy, well, you don’t understand your power, which, thanks to the internet, is being joined together with other like-minded people around the globe, bubbling up from “below.”

In part, it needs to be like the tobacco settlement. Or like the nuclear industry was intended to be: polluter pays. Tobacco-like structure wouldn’t fix the fossil fuel corporate stranglehold since lopping off its head in the US will only make the other Big Oil companies stronger. No. It needs to be global. And it needs to be zero “carrot,” and 100% “stick,” since that is the ONLY thing that this industry understands.

As some of my readers know, this past October, my request to the Office of the Prosecutor of the International Criminal Court in The Hague was accepted for consideration and assigned a case number (see below). In my request, I outlined the Crimes Against Humanity and many other well-documented criminal atrocities committed by the fossil fuel industry, en masse. 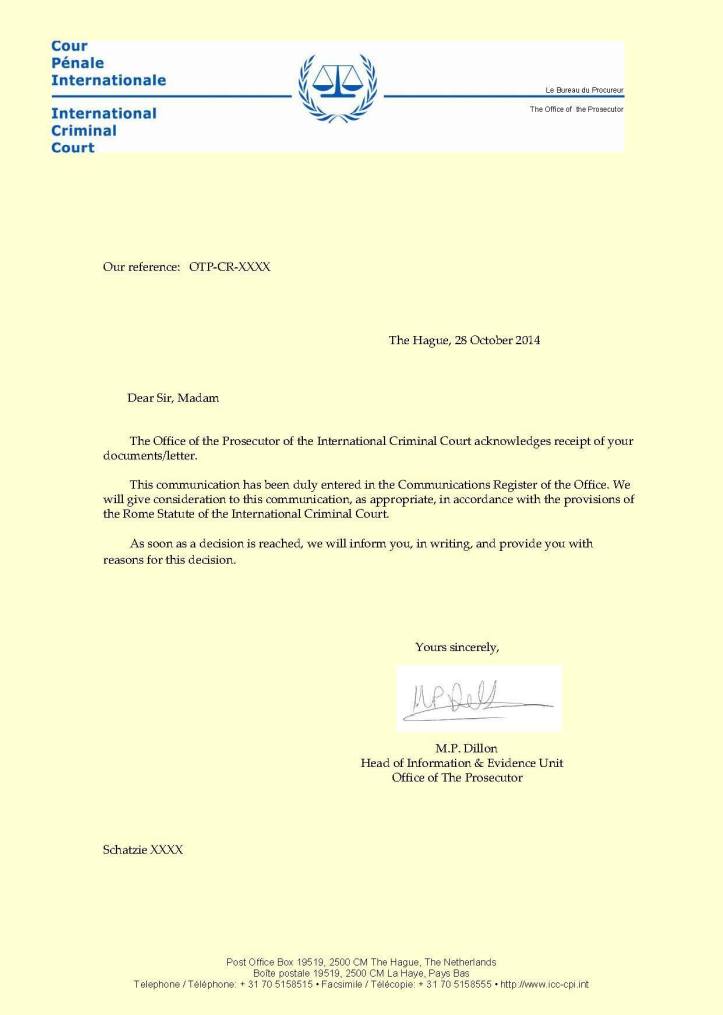 Until the fossil fuel industry are rightly labeled as the criminals they truly are (which, by the way, will also dry up their project financing), guilty of virtually every atrocity imaginable (I imagined it. I wrote it), THEY WILL NOT STOP. And not only will they not stop, but they are working feverishly, via back channels, to cover their filthy asses financially and liability-wise, when the methane, literally, hits the fan. We on the “right side” of history MUST NOT roll over and accept this. Like those who hunted down former Nazis til their dying day, we must not allow that evil to exist among us without justice being served and victims, who would basically be all of us, are compensated. And, to be clear, when I say, “compensated,” I am talking about THEM paying for what they have knowingly done to terrorize our fellow man, along with what has been done to all the other creatures who do not have a voice. Or never had a chance to be born because of the deadly toxic stew inflicted upon their environment, created by these monsters. And, by the way, it must not only be the fossil fuel companies who bear the brunt of this blame. There is an army of accomplices who aided and abetted them, from the US Congress over many decades to virtually every US Cabinet.

So you want to talk “trickle down?” Fine. I’ll include the appropriate think tanks, non-profits, media outlets, trade associations (are you listening, Heritage Foundation, National Petroleum Council, Fox News?), lobbyists, some entire University labs and departments which are bought and paid for by the fossil fuel industry. Indeed, if the beast is to be proverbially “slayed,” then all its allies must go, as well. Think Sun Tzu. Think Machiavelli. Think tobacco industry. To think like an environmentalist…to think like a decent person, or a “fair” person, or a “nice” person, is to be essentially viewed as a lamb for slaughter by the fossil fuel industry. To think of ourselves as ANY LESS THAN warriors means that we go extinct. It’s that simple, really. And being that simple makes our path clear. Okay, maybe extinction is not a bad thing. We pretty much deserve it. But think of the utter devastation we leave in our wake. Utter devastation. The planet, in some form or another, will continue for a few billion more years, barring an asteroid smack down (gamma ray burster would still leave the basic planet in tact, just not the life on it) until our sun goes all “red giant” and the fat lady REALLY sings. But, for the love of all the other creatures, big and small, whose survival hinges upon OUR survival so that we can work towards being proper stewards of this planet, rather than conquerors and destroyers, we need to pull our collective heads out of our asses and stand up, straight and tall, and impose proper order. Not a single, “please” shall be uttered, please.