This is a mug shot of Gary Ewing. As a 22 year old, he got caught stealing, which earned him a 6 month suspended jail sentence. Four years later, he stole a car and spent a year in prison. Then, a few years after that,he went into a pro shop in 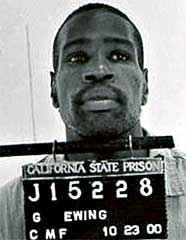 Southern California, grabbed 3 golf clubs, stuffed them down his pants, and tried to walk out without paying. He was (obviously) caught, arrested and thrown in jail for life thanks to California’s “Three Strikes” policy. He eventually died in prison, twenty seven years later at the age of 49, from pneumonia and colon cancer.

Now, can you name the American corporation which, like Ewing, broke the law, however, in their case, not one person spent even a day in prison? Their crimes involved many, many millions of dollars spent on bribery and coercion done over the course of nearly two decades and spanning at least 9 countries, involving the US State Department, British royalty, countless spies and couriers (some identified and some not), diplomats, both foreign and domestic, tax evasion, and money laundering.

The first person to correctly guess which corporation I am referring to and what or which laws they broke, will win Naomi Klein’s audiobook, “This Changes Everything: Capitalism vs. the Climate.”

HINT: This American company has done what a LOT of US companies have been nailed for in recent years, although this fossil fuel company did it BIG, earning themselves the dubious distinction of getting the largest financial penalty of its time. The amount has since been surpassed, but this one made headlines.

The Securities and Exchange Commission (SEC) and the Department of Justice enforce this 1977 provision of the Dodd-Frank Wall Street Reform and Protection Act.