I’ve put a lot of IKEA furniture together in my life. I’ve also built more LEGO structures than I can count, some of them (especially the Star Wars sets) have dozens of PAGES of instructions and thousands of little plastic pieces. It can be pretty addictive. The maddening thing about both IKEA furniture and LEGO creations is that if you make a mistake early in the process, you’ll eventually realize it. And regret it. At that point, if it’s “late in the game,” you have to make the painful choice about whether to tear the whole thing down until you find the mistake, or just deal with it and expect problems. Not a good thing with furniture. Not a big deal with non weight-bearing toys.

The United Nation’s Intergovernmental Panel on Climate Change (IPCC) is exactly like LEGOs and IKEA furniture except there are a lot more pieces. The IPCC was created in 1988 by 2 United Nations organizations: the World Meteorological Organization (WMO) and the Environment Programme (UNEP). The IPCC’s purpose is to assess the science of climate change for policymakers to use when making environment-related decisions. The first report by the IPCC (called the First Assessment Report, or FAR) was released in 1990 and there are now five assessment reports plus Special Reports, Methodology Reports, Technical Papers, Supporting Material Reports, Synthesis Reports, Summaries for Policymakers and too many other reports to list in what time I have left on Earth.  The First Assessment Report laid the groundwork for what is referred to as the United Nations Framework Convention on Climate Change (UNFCCC) and for future IPCC collaborations and meetings. All the while, climate change has only gotten worse.

As ExxonMobil is so quick to point out, their scientists have weaseled their way into the IPCC since its inception. Using investigative reports by Inside Climate News along with publicly available information, I can pinpoint where ExxonMobil scientists manufactured doubts (about the science), insinuated that there were many uncertainties about the facts, changed the tone and intent of texts, and altered IPCC language in their First, Second, Third, Fourth and Fifth Assessment Reports, which they were a part of. ExxonMobil scientists also participated in, and changed the course of, IPCC Working Groups 1, 2 and 3 along with IPCC Special Reports and countless IPCC conferences and symposia.

The fossil fuel industry is thoroughly and seamlessly interwoven throughout the IPCC, UNEP, the World Meteorological Organization, and even the UN’s International Maritime Organization. The web of lies and attempts (and successes) at obfuscating facts is beyond diabolical. In one instance, an ExxonMobil scientist published, misrepresented the publication of, and totally lied about, scientific papers attempting to create doubt about the paleotemperature records in the mid-Holocene epoch and climate models. This was intentionally done to undermine Michael Mann’s Hockey Stick along with the credibility and accuracy of temperature records in the 20th century. Don’t forget that ExxonMobil’s own climate models were already accurately predicting the impact of human-caused climate changes as early as the 1970’s.

Once the fossil fuel industry scientists, economists, and consultants were thoroughly embedded in the earliest and first UN IPCC assessments and, indeed, throughout international environmental conventions, their oily footprint and language became part of the landscape and fabric of every final product. The tail is now totally wagging the dog. And the key players within the UN structure are so incredibly clueless and removed from pretty much any type of critical thought that they can’t even see it. This situation is worse than the most campy TV parody, and easily surpasses the most surrealistic movie Stanley Kubrick could have imagined.

Take, for example, last year’s “celebration” of the 40 year anniversary of IPIECA (which stands for something approximating “the global oil and gas industry association for environmental and social issues”), a group made up of half the world’s oil producers with 37 oil companies, 6 of whom are “super majors” (like BP, ExxonMobil, Shell), 7 are national oil companies (like Saudi Aramco and Malaysia’s Petronas), and 16 international oil and gas associations, representing another 400 fossil fuel companies. This behemoth was created in in direct response to the UN’s launch of its Environment Programme (UNEP) in 1974. You’d think it bad form for this group to be bragging about how chummy they are with the United Nations on all things environmental and pertaining to social (in)justice, but that’s just how far gone the whole thing is.  Keynote speaker at IPIECA’s 40 year Anniversary Gala was this tool, Achim Steiner:

I’ve included him in prior articles about methane hydrate “development” (maybe the worst idea in the history of mankind). He’s the UN Under-Secretary General AND the Executive Director of the UN’s Environment Programme. And he just can’t say ENOUGH about how awesome the IPIECA is. Neither can Koji Sekimizu who is the UN’s Secretary General at the International Maritime Organization and who was a speaker, partier and participant in the whole thing, as well.  They were joined at the IPIECA 40 year Anniversary Conference, dinner and gala by none other than Christiana Figueres, who not only attended the whole thing, but was also a participant and speaker. She is, of course, the Executive Secretary of the UN’s Framework Convention on Climate Change (UNFCC). And to see just how utterly out of touch with the reality of, well, basically ANY situation the rest of the world is in, the LINK to the conference program for this ridiculous, “in-your-face and up-your-ass ” event is NOT via the IPIECA’s own website. It’s through the United Nation’s Office of the High Commissioner for Human Rights (OHCHR) website, which defies any reasonable explanation. In fact, there are lots of links emanating from the UN’s websites to cohorts over at the fossil fuel industry. I’m going to just put two of them below, which will lead to further reading about this absolutely ridiculous 40 Year Anniversary Celebration thing. You have to see it with your own eyes to believe it.

This one is to the IPIECA 40 year Anniversary Conference Program, and this one is the follow up report to the 40 year Anniversary Conference. Note that both websites are the United Nation’s – not IPIECA, which is so crazily inappropriate that I don’t know where to file it in my brain. Not only did (and frequently do) several UN environment and climate officials a) attend a celebration of an organization made up of oil and gas giants whose sole purpose is to subvert the UN’s work, but b) they spoke and were keynote participants, and c) wrote testimonials and praised the IPIECA, and then d) put the celebration events WITHIN their own website. It’s like the US Drug Enforcement Agency (DEA) attending, publicizing, and posting about a celebration dinner for Mexican drug cartel kingpin “El Chapo” upon his escape from prison; or the FBI’s website hosting a link to bin Laden’s birthday party, which they attended, and made a toast at. Or the head of the SEC attending Bernie Maddof’s “How to Get Rich Quick” seminar, and being the keynote speaker, and going to the after party, and putting a link to it on their website. How about the US Surgeon General being the keynote speaker at a gala and weeklong celebration for Philip Morris Tobacco Company’s 50 year anniversary, and then putting links to the whole thing on SurgeonGeneral.gov’s website. How appropriate would that be? The obvious answer is: not appropriate at all.

It gets so much worse but I don’t want to depress anyone (else). I actually read through most of Climate 2020: Facing the Future which is a UN publication, and it was so painful, given how much time, energy and paper they’ve wasted that I couldn’t bear to mark it up and put it here for you to read. If you do you want to read it, please use the link above. It’s from June/July 2015 and on page 151, you can see that the IPIECA actually bought (?) a page in the thing, like an advertisement, lauding their accomplishments. Using another analogy, that would be like the Marlboro Man appearing on an entire page in the American Cancer Society’s Annual Report pretending that he’s a crossing guard in his “off time.”

There are a few pages I’ll put below from that UN Climate 2020 thing which were written by Christiana Figueres and published in June 2015 (the timing will be relevant): 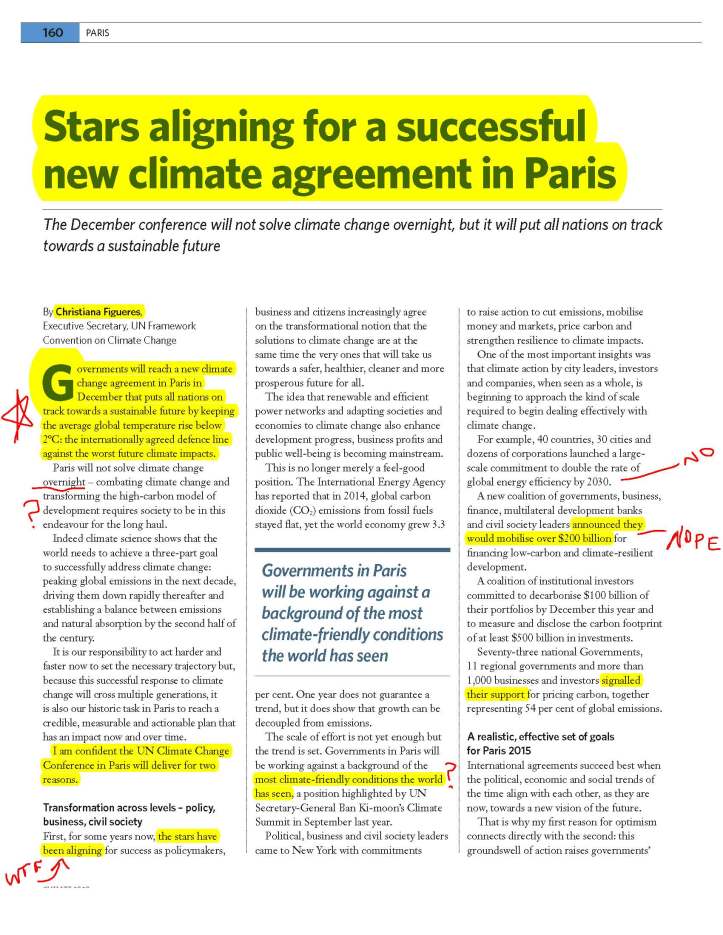 Okay, now here is something that just appeared in The Hill and as you read this, keep in mind that she just said (in June 2015) that 2 degrees was a reachable goal:

I don’t know if she’s some sort of lunatic, or she’s trying to be charming, or what, but she’s so far off the mark that she should quit and go into hiding immediately. And take that Achim loser with her.

Contrary to her assertions, this entire “thing” COULD have been solved decades ago. If she needs help figuring it out, PERHAPS she should consult with someone OTHER than a cocktail-party full of fossil fuel executives. I have laid out several plans myself. In detail. It’s not difficult, lady. It would have required only ONE STEP if it had been done 20+ years ago and even today, with all that time wasted, it’s still just ONE step. Actually, I can sum it up in just four words (as opposed to the thousands and thousands that this bunch of sell-outs have squandered). 23 years of wasted time, effort, frequent flyer miles, false importance, and fake pageantry can be turned around if we simply:

Much like a wonky piece of IKEA furniture that is wrong from the start, the Paris climate talks cannot and will not work. This process, infiltrated by the fossil fuel industry from the start, has been carefully and meticulously managed and steered to “achieve” absolutely nothing. Only to buy time. The people within this organization (who are not already there at the bequest of the fossil fuel industry) are either deluding themselves into thinking that what goes on in Paris this December somehow matters, OR they believe that too much has been invested to chuck the whole mess now.

Any way you slice it, it’s utter folly. And it is not that “expectations” should be managed so much as people need to call this atrocity what it is, which is an assault on basic intelligence. You absolutely cannot have the exact people and industries that caused the ENTIRE problem writing and managing the rules and discussion, even dictating the language to be used. That will never, ever, ever work. If this was a LEGO Sidney Opera House, you’d have to take it down to the very base to find the mistake…

The IPCC recently chose a new Chair. His name is Hoesung Lee, and he’s from South Korea.

Guess who he used to work for?