That’s 350.org’s Bill McKibben’s assessment of ExxonMobil, and he’s being too kind. The fact that ExxonMobil knew – with certainty, nearly 40 years ago – that humans were causing CO² levels to dangerously rise by burning fossil fuels, and then they chose to bury their own supporting evidence, of course, isn’t actually news.

No, wait…it is news!

It just feels like we’ve always known it. Except that we didn’t, and we didn’t have proof. Now we do. Even reading the previous 76 or so words isn’t really getting you riled up, is it? It’s almost like there’s a collective undercurrent of people who feel “meh.”

Go ahead and admit it…there all these petitions being passed around, asking for everyone’s signatures demanding that the Department of Justice investigate ExxonMobil, but, let’s face it: at this point, we’re pretty desensitized to signing another petition and we barely register the significance of what it hopes to accomplish. Believe me, I get it. I’ve only been at this for a little over a year and my eyes glaze over with each new spastic environmental email (I’m now up to about 2-3 dozen a day which means that any actually personal email pertaining to my real life just ends up getting lost in the “noise”). But they’re important..really and truly important.

We can’t let ourselves forget a few things.

1) We are collectively now able to move mountains because we are connected. It was never like this before, and for all we know, this is merely a window of opportunity until someone, somewhere figures out how to put a cork in it;

2) We’re running out of time, environmentally-speaking. And it’s going to be a photo finish, at best. Of this, I am certain. All the way down to my core. Call it intuition, the subconsciousness, whatever, but I’m far from alone in feeling this.

You’re thinking, “Okay, what is it now, Schatzie? What do you want me to do now?”

I want you to get mad, and I’m not the only one who thinks this way. Bill McKibben puts it best:

“In its greed, Exxon helped – more than any other institution – to kill our planet.”

ExxonMobil knew the planet was going to be under catastrophic environmental circumstances (in their words) by the early 21st century, even identifying the accelerated heating up of the poles (!), and now we have proof? Pffft. That’s not going to rattle many cages because most of us expect much worse than that from these crooks. But this is REALLY, really bad. They not only knew basically everything before the majority of actual scientists did, but they hid the information, and then denied it publicly for decades. They could have saved us so many years, and so much money if they’d worked with the scientific community, rather than bogging them down with the help of professional climate change deniers. There are so many onion layers of criminal behavior here, folks.

Inside Climate News did an 8 month investigation into ExxonMobil, and they dug up some seriously damaging shit. Plus they conducted a lot of interviews, and they connected a LOT of dots for us. The picture they’ve painted is beyond compelling. It makes the tobacco industry investigation look like an ugly cousin that no one even remembers except at Thanksgiving. And they even laid the whole thing out for us in (sort of) chapters, which means they took a TON of stuff and synthesized it down into a story, or a narrative, which is what we humans need to understand stuff that is lengthy, complicated, and just all-over-the-place, like scattershot. Did you know that they won a Pulitzer Prize for national reporting before? They’d sure as hell better win another one for this investigation because the proverbial nails are in the coffin, the case is closed, the fat lady has sung, the votes have been tallied, etc.

Their 5 part series about ExxonMobil can be found on their website (Part I, Part II, Part III, Part IV, and Part V) and their write up on their investigation is excellent, not too long and very well laid out.  It’s so good that I can’t even put it into words. Here are a few visuals to show how it makes me feel:

Inside Climate News has posted internal Exxon memos and reports here. I’ve taken a handful of them, marked them up and put them below. I can’t do all of them because it would far exceed the storage capacity for my website. Again, here is that link to see the full list that Inside Climate News has provided. The things to keep in mind are this: it didn’t have to end this way. The ugly, flip side of “one person can make a difference” is that it probably was just one, or at most a handful of people at Exxon, around 1988, who did a 360 on their own science, possibly after hearing James Hansen’s testimony to Congress and being alarmed by the public’s reaction. Up until around 1988, this group of people were indeed earnest and sincere and duly alarmed by what they were researching. Moreover, they were remarkably correct…not always, but the majority of the time. When you read their internal communications, you see that there is no “covering their ass,” there is no underhanded subtext, and there are even moments when some of them dream about Exxon taking a leading global role in actually saving humanity, rather than their current attempt to extinguish us.

Exxon did this work with a lot of people who are alive and well TODAY, several of them I’ve written about here. And as the saying goes, they have names and addresses. In other words, there were a LOT of people who knew how advanced Exxon climate research was decades ago – and they have said nothing. Chief among the culprits are the government agency I have targeted the most: the Department of Energy. I guess I was right all along.

The first memo I’m posting below is from 1978, so it’s not (chronologically) the first of the 7 documents I’ll put below, but I think it’s an important one. After that one, I’ll put the others in chronological order, with a double line between them. If they’re difficult to read, click on the actual document and it should become larger. 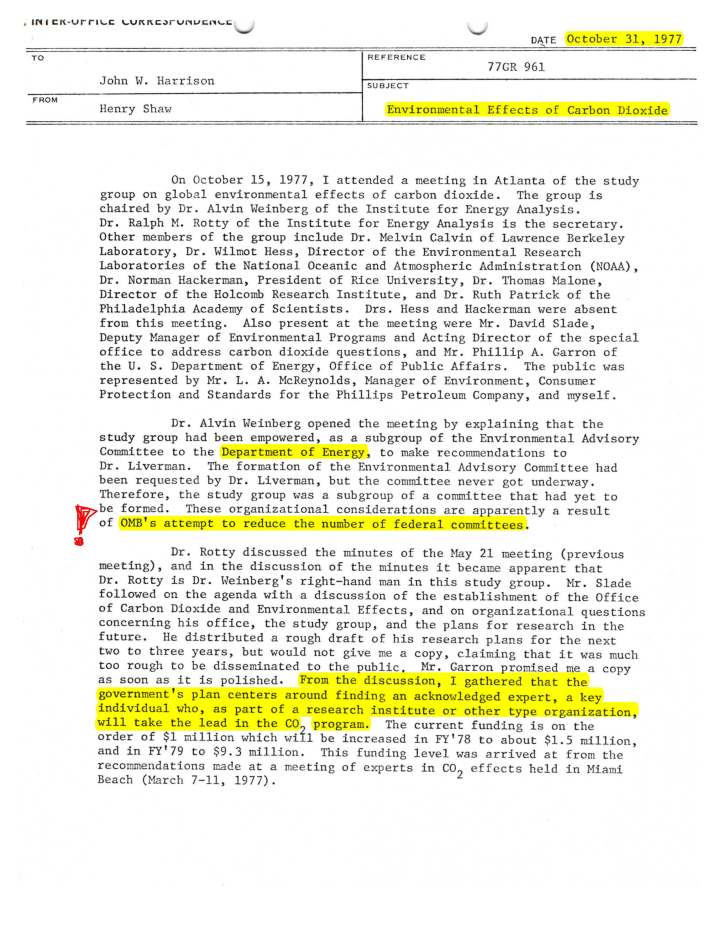 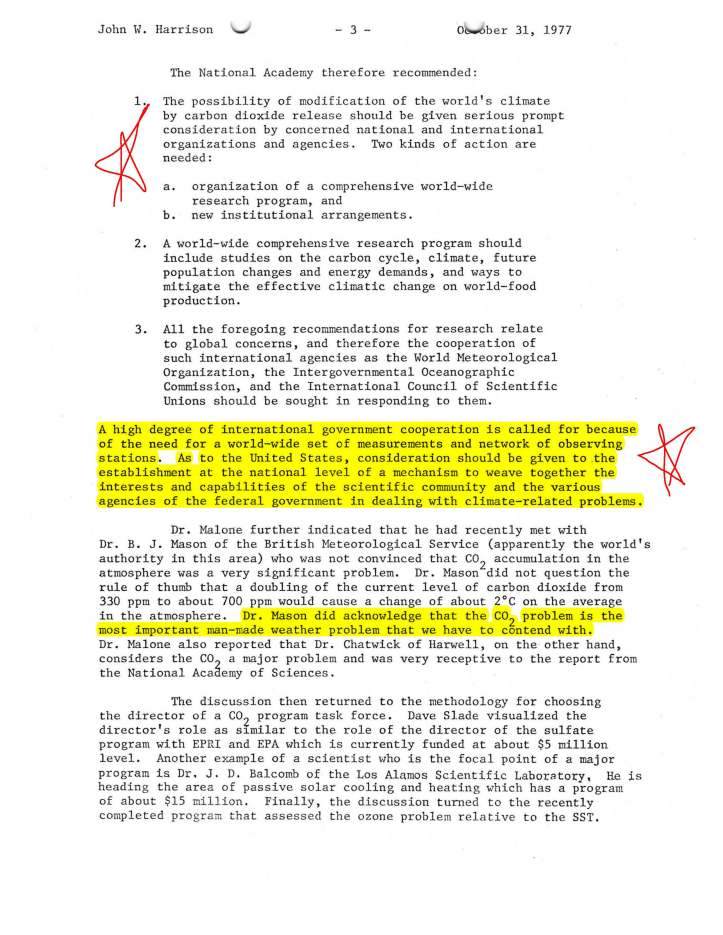 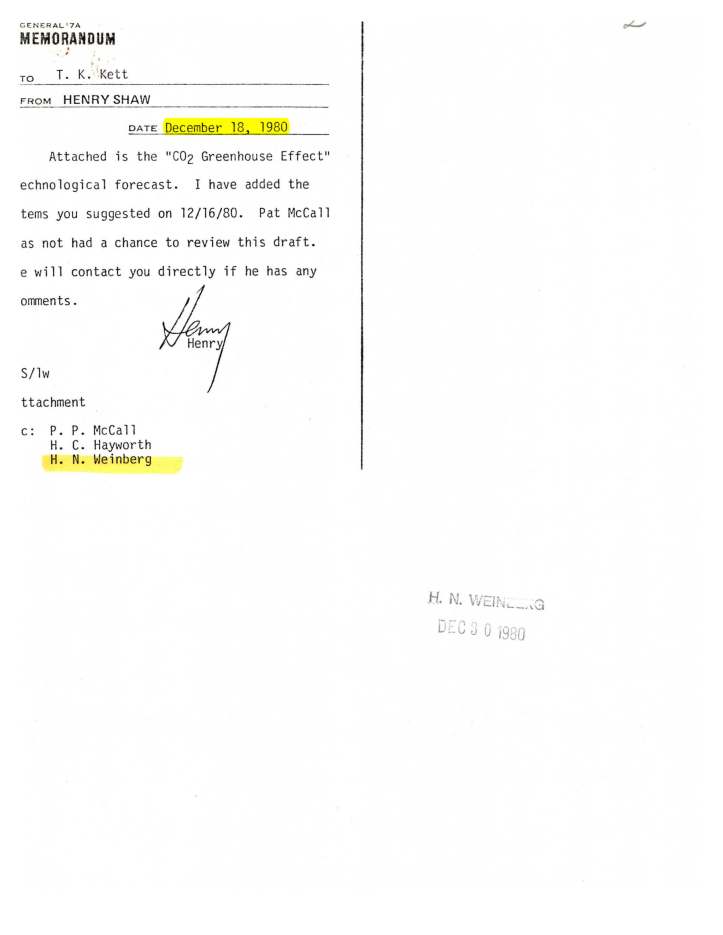 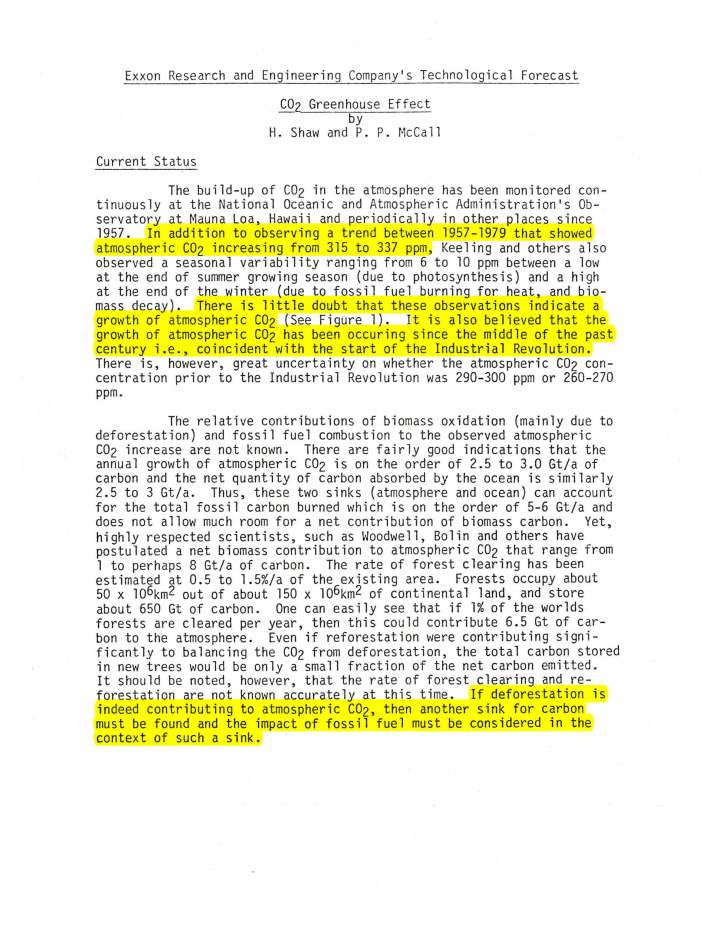 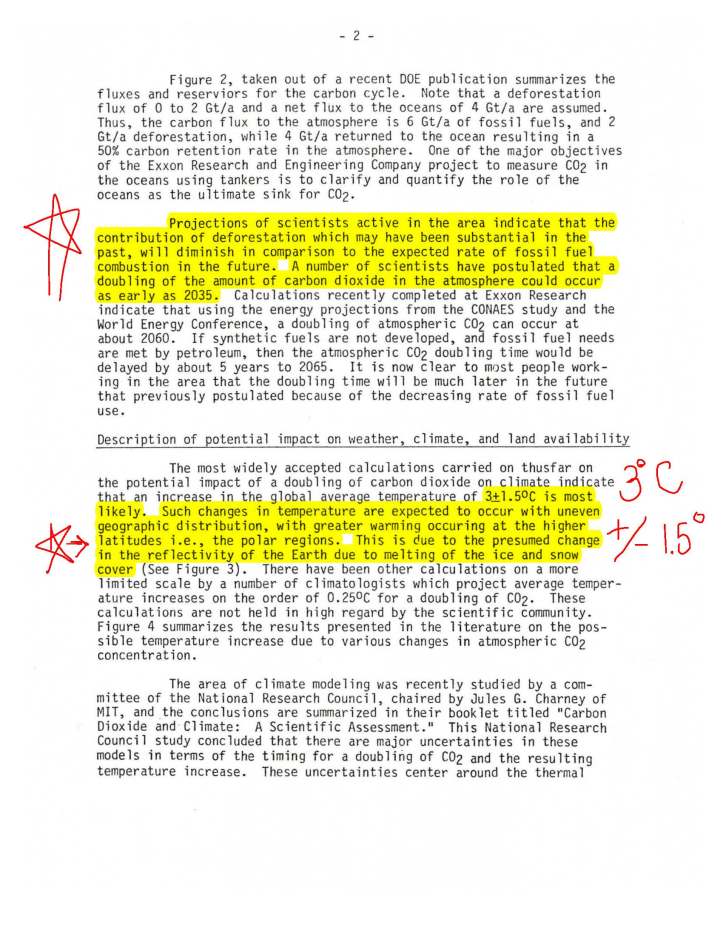 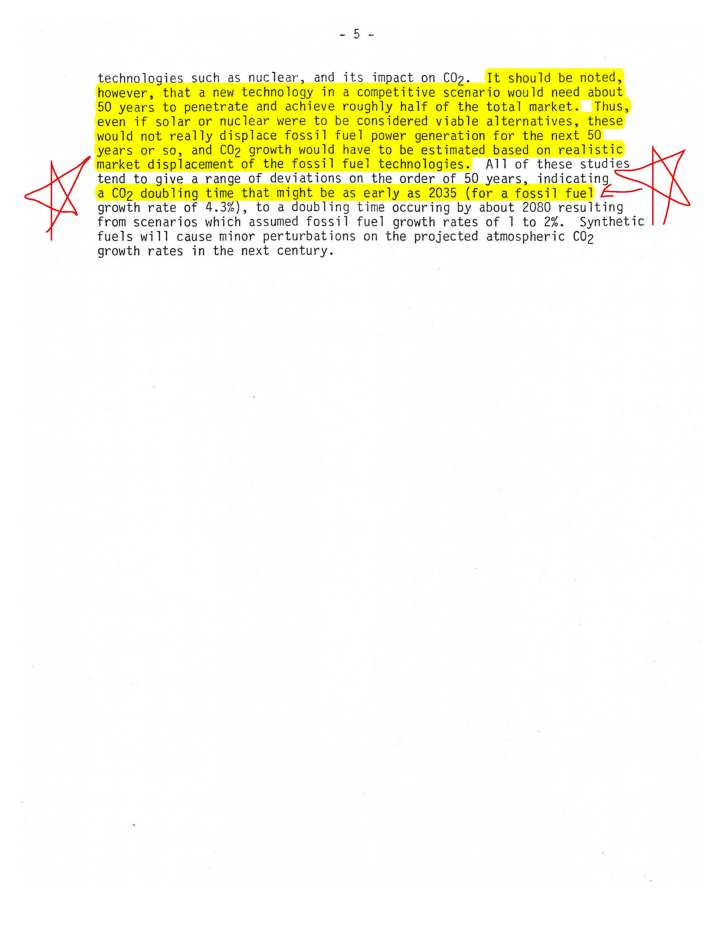 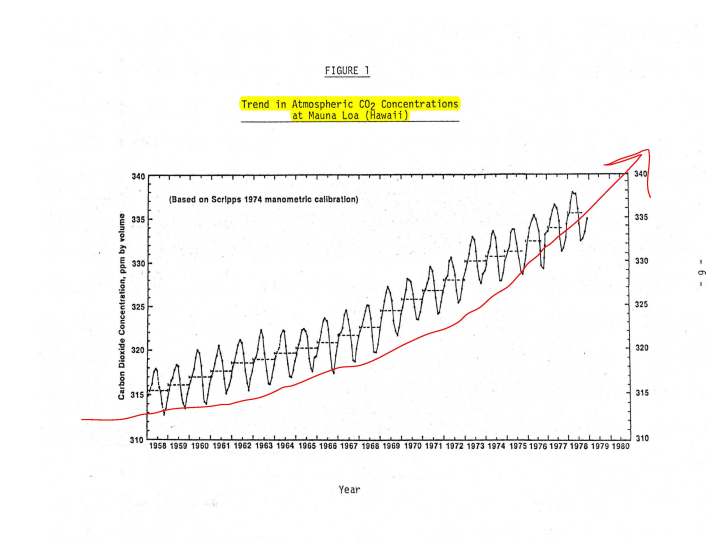 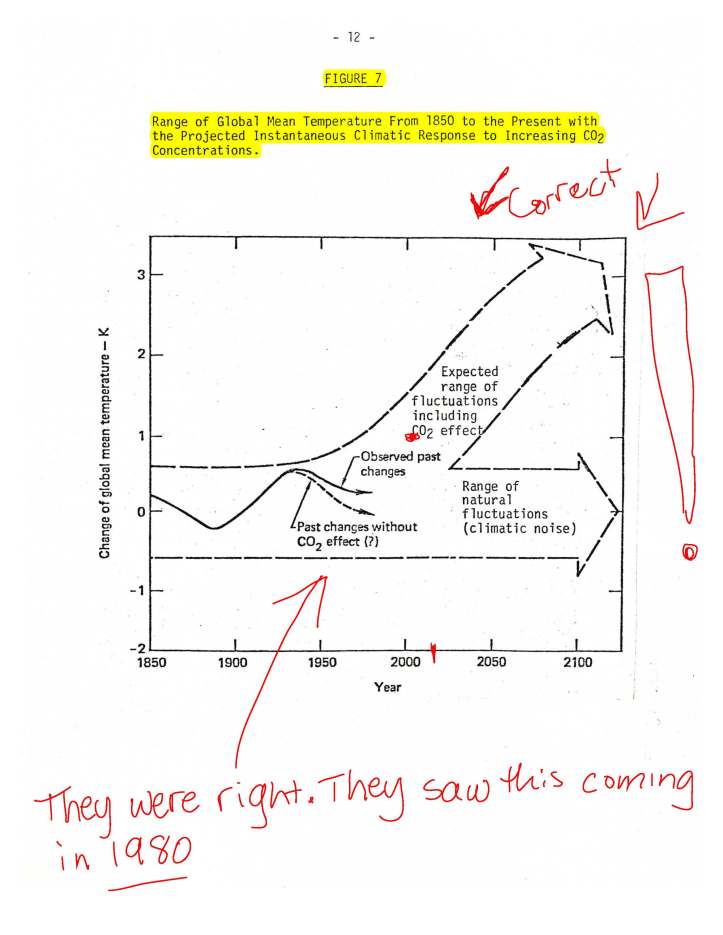 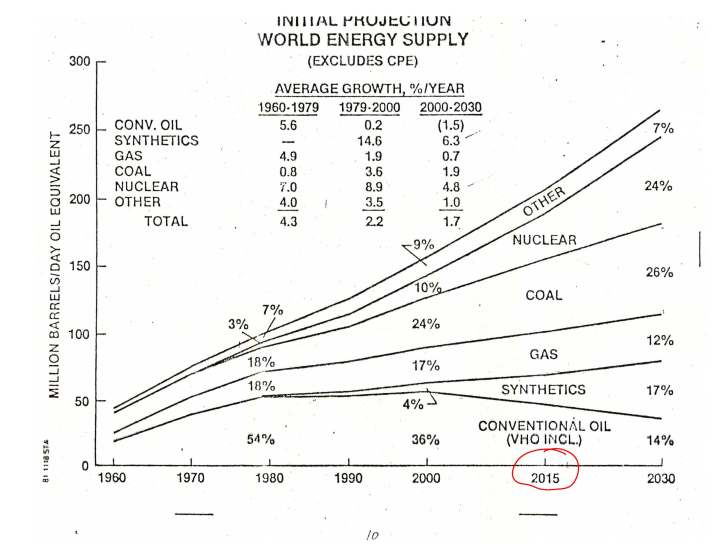 And finally, this one refers to the ethical imperative for Exxon to do something. It’s dates September 2, 1982 (4 pages) 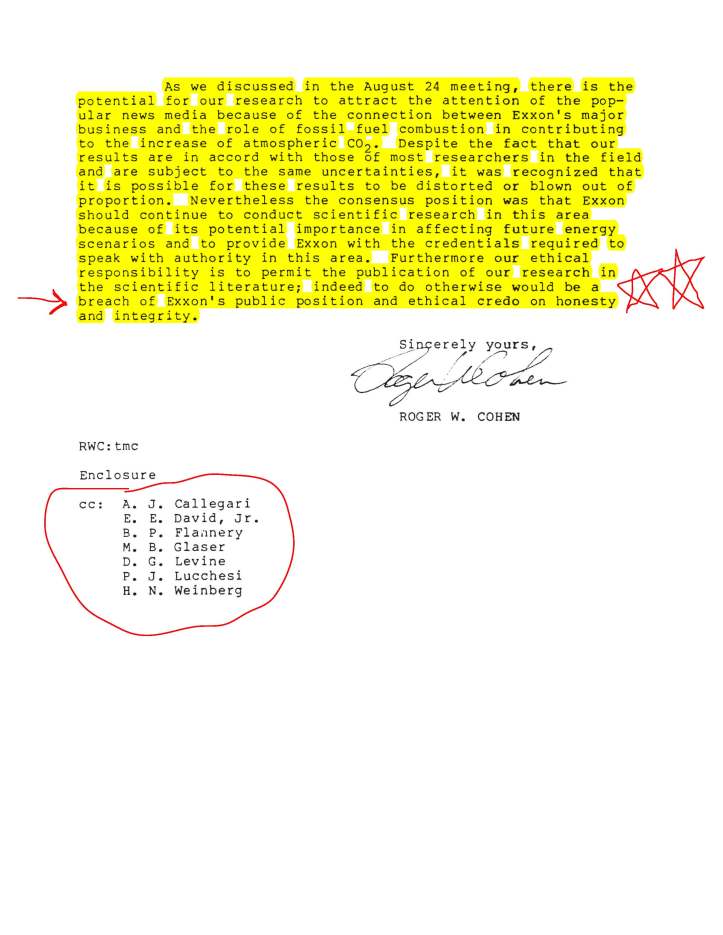 By now, if you’re like me, you’re pretty bleary eyed. What I’ve posted above is a sampling of what Inside Climate News has on their website. The LA Times, in conjunction with Columbia University did an independent investigation of their own, using different documents, and came to the same conclusion. The takeaway here is that the fossil fuel industry sees the writing on the wall, and the wall says, at the very least, RICO. If lawyers on the side of us good guys cannot take down and shutter up ExxonMobil with all the documentation that Inside Climate News, the LA Times, and Columbia University have provided, along with a landslide of other foundational documents from dozens of sources, then, frankly, we deserve to be extinct.