By now, most people who are concerned about climate change have heard about the student movement on college campuses to divest from fossil fuels. This brilliant idea to stigmatize the fossil fuel industry has roots in a similar approach (which was extremely successful) roughly 30 years ago, when students demanded that their universities divest from investments and sever all ties with financial institutions directly involved with the apartheid government of South Africa. And even though there had been resolutions and calls-to-action for decades prior to the anti-apartheid divestment movement at US colleges, Nelson Mandela said afterwards that he believed the University of California’s massive divestment movement was particularly significant in ultimately toppling white-minority rule in South Africa.

In 2011, with equally ambitious goals in mind, the Mountain Justice student organization at Swarthmore College in Pennsylvania began requesting that their university divest from its own fossil fuel investments. It wasn’t an easy sell at first, either, for these young climate change warriors. But by kickstarting this discussion and actively engaging students across the country, their message began to circulate to other campuses and organizations, essentially reigniting the anti-apartheid campaign of the 1980’s. These Swarthmore students pushed the climate change movement towards different solutions, strategies and approaches to dealing with the fossil fuel industry. They created real social, political, and economic change in ways that hadn’t been seen in decades and they, along with Bill McKibben of 350.org, have inspired such disparate groups as faith-based organizations, The Guardian news service, and several other university endowments to reassess and divest from dirty energy.

One would assume that their own institution of higher learning would have immediately jumped on the bandwagon which had been built by its own student body, right? And when you consider that the head of the United Nations Framework Convention on Climate Change (UNFCC), Christiana Figueres, is a Swarthmore alumni, it seems a “sure thing,” doesn’t it? Well, you’d be wrong. 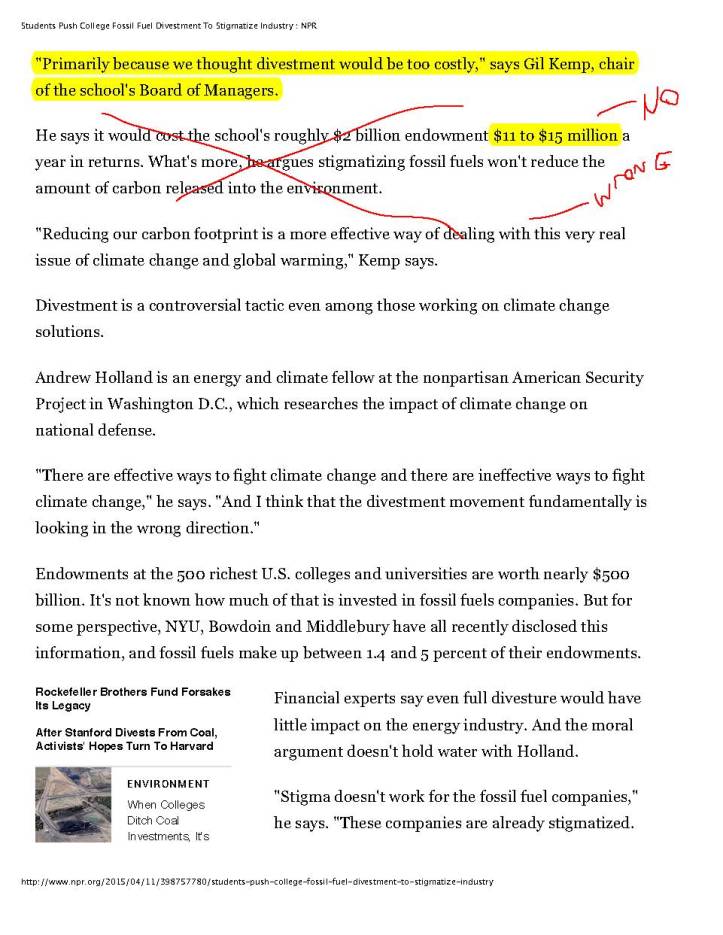 And who is Gil Kemp, the man responsible for turning his back on the Mountain Justice divestment movement? 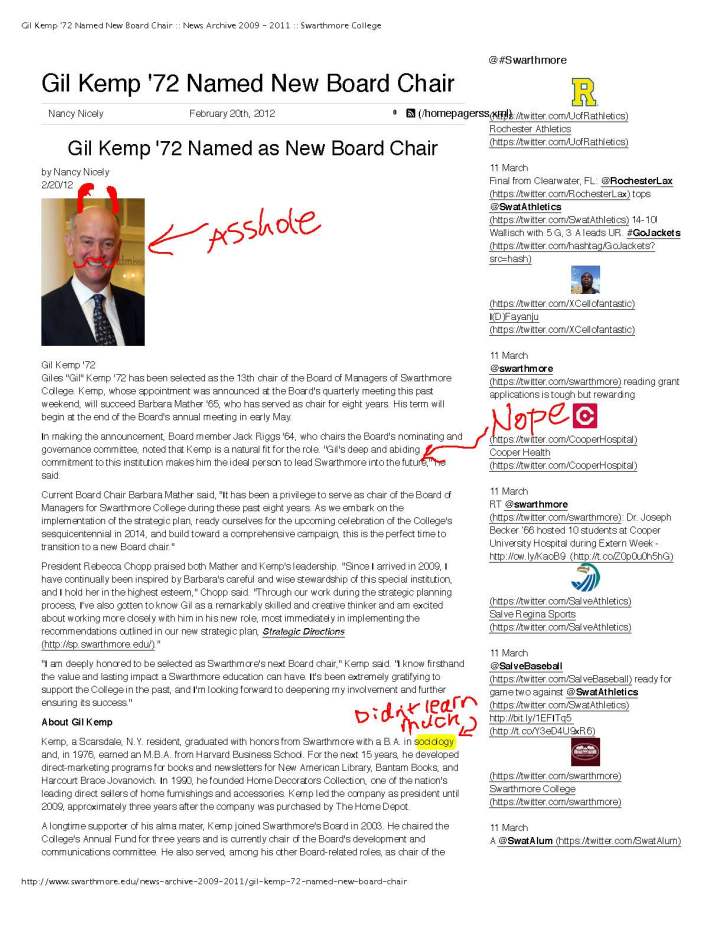 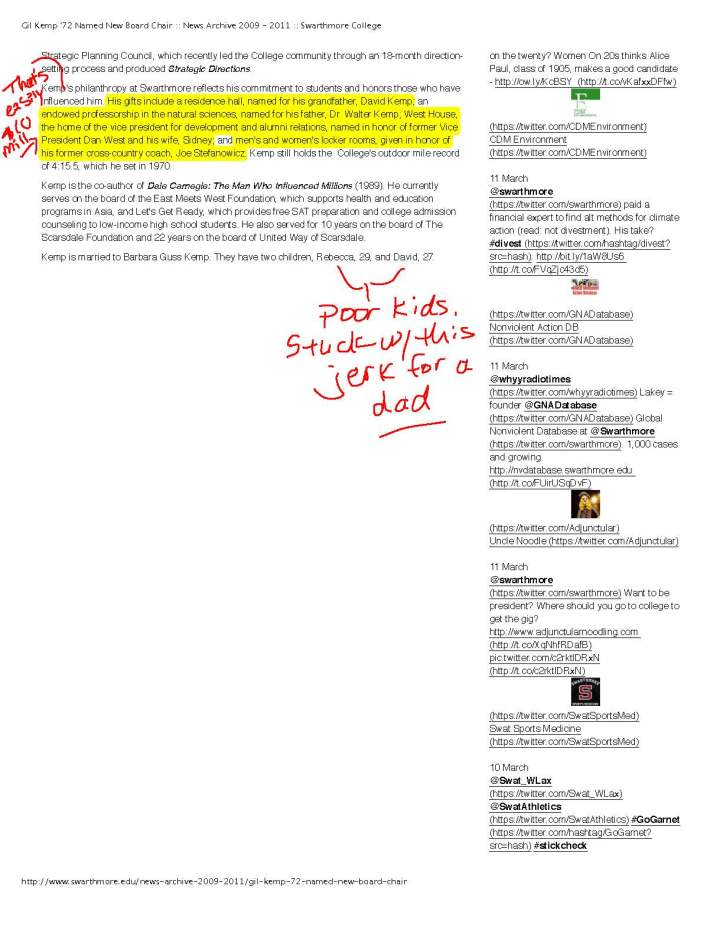 One would think that coming from such a proud and accomplished lineage, he would have inherited at least a modicum of greatness himself, or at the very least, a sense of self preservation. Apparently not. In fact, I’d go so far as to say that the Kemp family name will more likely be synonomous with simple, base, run-of-the-mill greed both inside and outside of Swarthmore College.

And what did Gil Kemp have to say about this decision to utterly fail Swarthmore’s students? 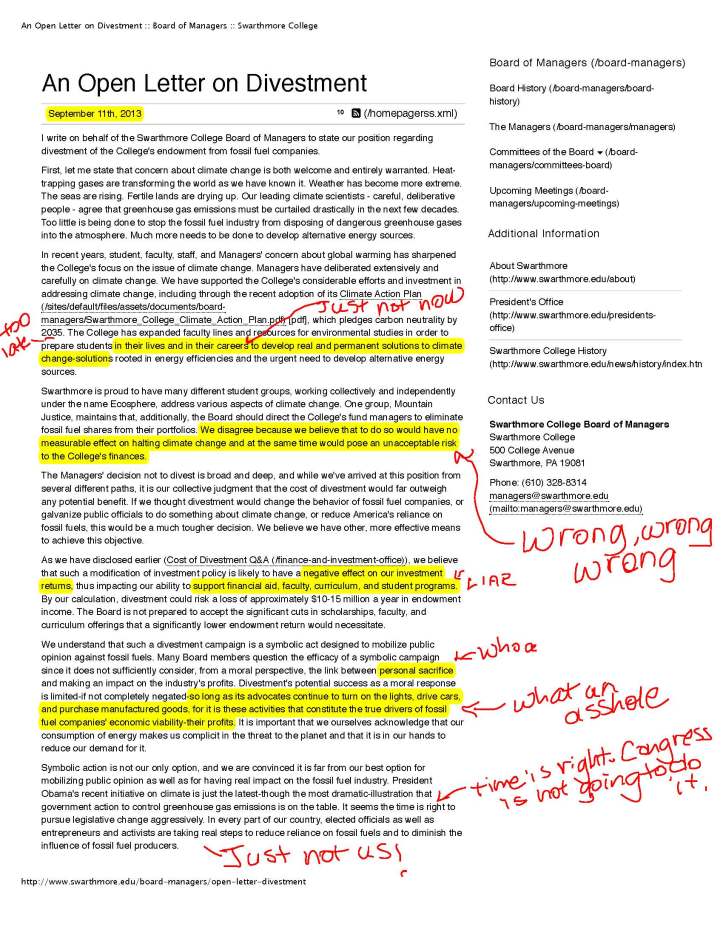 One has to wonder if he’ll pay any attention to the Ceres Organization’s recommendation of January 2015 to divest from fossil fuels, as the Mountain Justice students asked him to do 5 years ago. And the thing that ALMOST makes me believe in karma is this: If Gil Kemp and the Board at Swarthmore divested from fossil fuels back when they were asked to do so, they’d have made a relative killing, as the price of oil was DOUBLE what it is today.

As for Gil Kemp, please see below: