Something dawned on me yesterday. I was responding to a reader’s frustration about the Department of the Interior and the Obama Administration’s decision to go ahead and issue oil drilling leases in the Chukchi Sea when I realized that we, who care so much about our natural world, may be missing the proverbial forest for the trees. My Facebook reader was lamenting that it just didn’t seem to matter WHAT “we the people” wanted from our elected leaders and government agencies. It seemed like they would, in the end, just go ahead and do whatever they wanted. I wrote back that I was starting to doubt that all the letter writing and phone calls and other actions opposing the fossil fuel industry served any purpose whatsoever, other than to make us feel like we were somehow part of the “process.”

And then I read this New York Times Editorial about the Keystone XL pipeline: 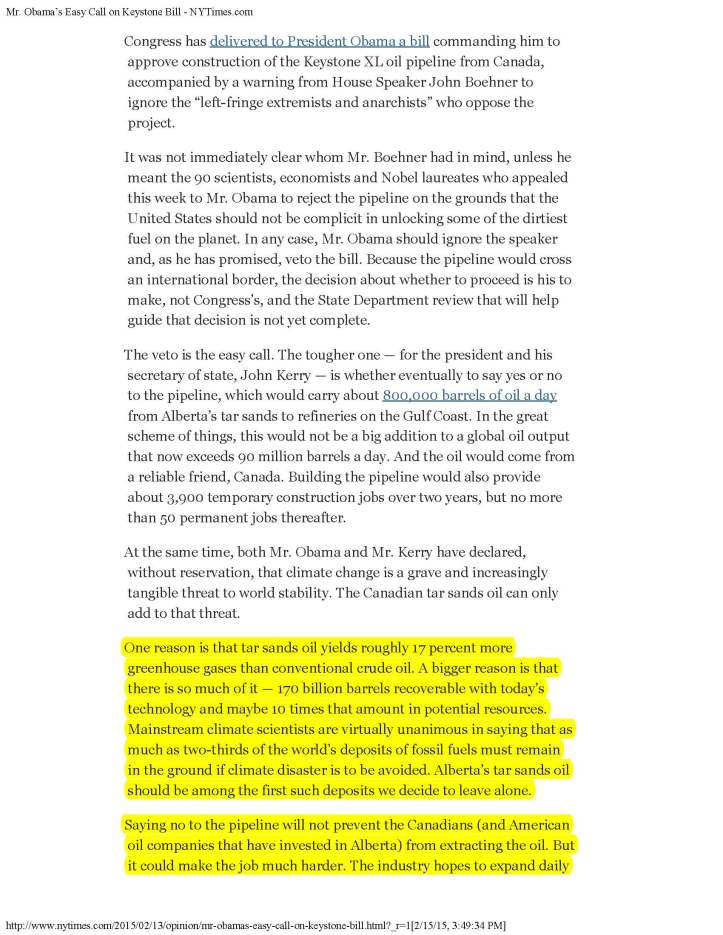 I suddenly realized what tangible and substantial positive results actually occur when environmentalists, from the Big Green groups weighing in legally on proposed legislation, to those brave souls who physically blockade an area slated to have an LNG port or segment of pipeline built, all the way down to the grassroots movements made up of people like you and me, who write letters and spread the word about climate change. And it’s huge, and somewhat difficult, but not impossible, to quantify.

To illustrate my point, check out these 3 really short videos of hockey players performing something called toe drag. If you don’t know anything about hockey and find yourself thinking, “I have no idea what is going on here,” just give it a quick look, and you’ll see what I mean. Toe drag, by the way, is actually referring to the “toe” of the stick, dragging the puck and changing the timing and direction of its trajectory, not dragging the toe of the skate, although that usually happens, as well.

Watch what Pavel Datsyuk does at the very last moment, before he scores a goal:

and here is another by Andrei Loktionov:

…and just one more with Steven Stamkos:

Other than being just a beautiful darn move which is fun to do when you get it just right, the strategy behind toe drag applies to today’s environmentalists. In these hockey clips, what you see, essentially, is momentum interrupted. The timing, albeit on a tiny scale, is changed and adjusted to what the player in possession of the puck wants, and NOT what his opponent wants, which is to to stop him from scoring and get the puck back. For me, the puck symbolizes the power to control if, when, where, and how carbon-based fossil fuels are extracted.

If you scroll back up to that New York Times Editorial, you can see just how much dirty tar sands oil has been kept in the ground by environmentalists who, through their version of toe drag, have stalled the Keystone XL pipeline approval process for over six years. True, extraction and production of tar sands oil has been underway, but these corporations are DESPERATE to be able to extract so much more than they are doing at present. And in these six years, key corporate players have come and gone, and today, we have the price of oil SO low that it almost makes this extreme extractive process unprofitable. If there had been no controversy, no opposition, no toe drag, those Canadian tar sands and much more of that once-pristine region, would be running full steam ahead and spewing out even more carbon into the atmosphere.

And don’t be fooled by Big Oil’s “poker face.” Sure, TransCanada and the fossil fuel industry, en masse, brag that they’ll move that oil to the sea one way or another, but just think about the Koch brothers, who literally bought themselves an election last November, in part, so that they could have the Keystone XL pipeline approval process be front and center upon Congress’ reconvening at the beginning of this year (which did indeed play out according to their plan). They have also publicly committed themselves, and their industry, to basically buying the next US Presidential election in 2016.

Now consider what many of us (myself included) perceive as a defeat for the environmental movement…the Chukchi Sea drilling leases controlled by the US Department of the Interior. Here is a DeSmogblog article: 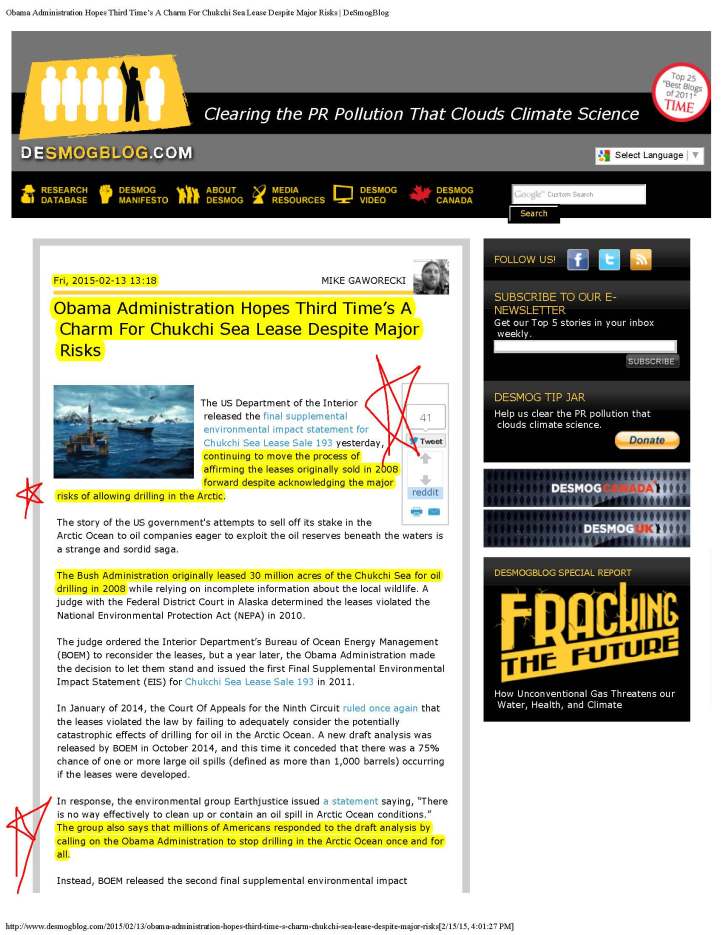 See where they write that it was the BUSH Administration who leased 30 MILLION acres of the Chukchi Sea for oil drilling in 2008? Again, a six year toe drag, forcing a pause in full-bore extraction in THAT delicate region. How much carbon has been kept safely where it belongs during that time? I don’t know exactly, but what I do know is that it has been substantial. And during that time, as Bill McKibben wrote in a 2013 Rolling Stone article:

Indeed, there are countless cases of environmentalists’ toe dragging in opposition to extractive activities the world over, some famous and many surely uncelebrated, which have kept the carbon IN THE GROUND. These are NOT inconsequential victories!

Why don’t we acknowledge this and celebrate it? I think that part of our “disconnect” is that we are going for the short-term, absolute “win,” as opposed to the long-term victory, which is much more elusive and might not totally play itself out for decades, and by which time many of us will have gone to “greener pastures.” Does that make these accomplishments any less significant? Absolutely not. Our myopic view that we did not “win” the revocation of drilling leases in the Arctic TODAY does not diminish the fact that much environmental damage has been forestalled. But such a victory does leave us with nothing to wrap our arms around, or hang our hat on, so to speak. But winning, in this arena, is not dichotomous. It’s more shades of gray, to use a newly popular phrase. And victories such as these are more long lasting than they appear, yet they inevitably leave environmentalists feeling that we “lost this one,” or that the fossil fuel industry beat us at “that one.” And it also gives way to feelings that we are just blowing in the wind from issue to issue, without any kind of strategy, when in reality, the end result, which is the absence of more CO2 in the atmosphere, is often blindingly brilliant.

Without seeing the bigger and more long-term “picture,” we utterly fail to appreciate the stunning beauty and raw power of our collective toe drag.