I f-ing LOVE science. For me, it’s like that metaphor of potato chips – you can’t stop once you open a bag (or a book or a file).  As my family and friends know, I am crazy about quantum physics, and one of my favorite (living) physicists is Max Tegmark. His recent book, “Our Mathematical Universe” is mind blowing, I’ve both read it and listened to it on audiobooks more times than I can count.

In between Max’ physics research & teaching as a Professor at MIT, and his appearances on various TV shows such as “Through the Wormhole” on The Science Channel, and his writing of awesome physics books, he also has a foundation, called FQXI with one of his friends, Anthony Aguirre and they have a neat website: http://fqxi.org/home

The thing that I love about Max is that, like me, he refuses to grow up. He often seems like a big kid, not afraid to make a fool of himself, to tackle a challenge or a subject that most would consider a “career killer.”  I actually had the honor of being invited to spend the day at NYU last year with Max and 5 other “giants” in their fields for a day of cutting edge science and math. It would have been these six mathematicians and scientists: 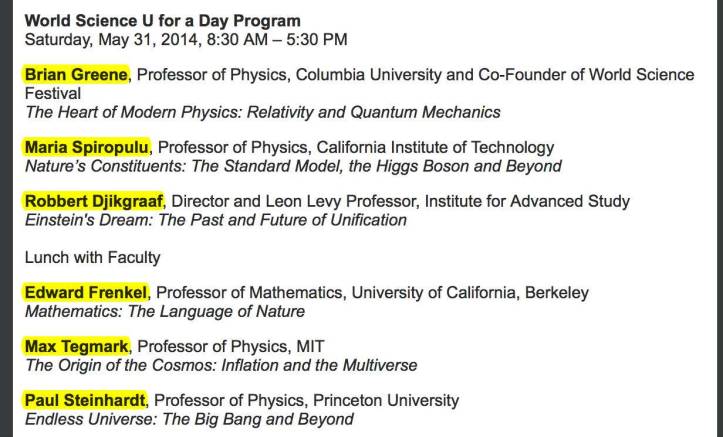 and they would have been spending the whole day with a handful of other scientists and ME (!) who they refer to as “a citizen scientist.” Anyway, long story made short, I did not attend because my kids had school and it would have been too disruptive. But some time after that the kids and I entered a summer video contest on Max’ FQXI site called,”Show me the physics.” We didn’t win (all of the contestants were actual scientists and some of their entries were TED Talks, so we knew we were out of our league) but we had a great time. One of our entries dealt with cosmic inflation and the other video was about my personal theory about black holes + white holes leads to “kaboom” and results in eternal cosmic inflation. But, I digress

This is one of the winners of that contest. He’s so funny. It’s a really great video based on Queen’s song, “Bohemian Rhapsody.” Here it is:

Here is another entry from someone whose work I really admire. Hers won for most haunting. I really like this lady. She’s a physicist and she writes some extremely deep and far reaching papers:

And if anyone is interested in entering their latest contest (deadline is March 4, 2015), which is titled, “Trick or Truth: The Mysterious Connection Between Physics and Mathematics,” please use this link and enter the world of Max and Anthony, you can check it out here: http://fqxi.org/community/essay/rules