Eureka! I found the $9 trillion dollars!!

Whew. Well, that was a close one! Now we can all stop searching for the $9 trillion dollars that the Federal Reserve couldn’t account for. From CNN Money: 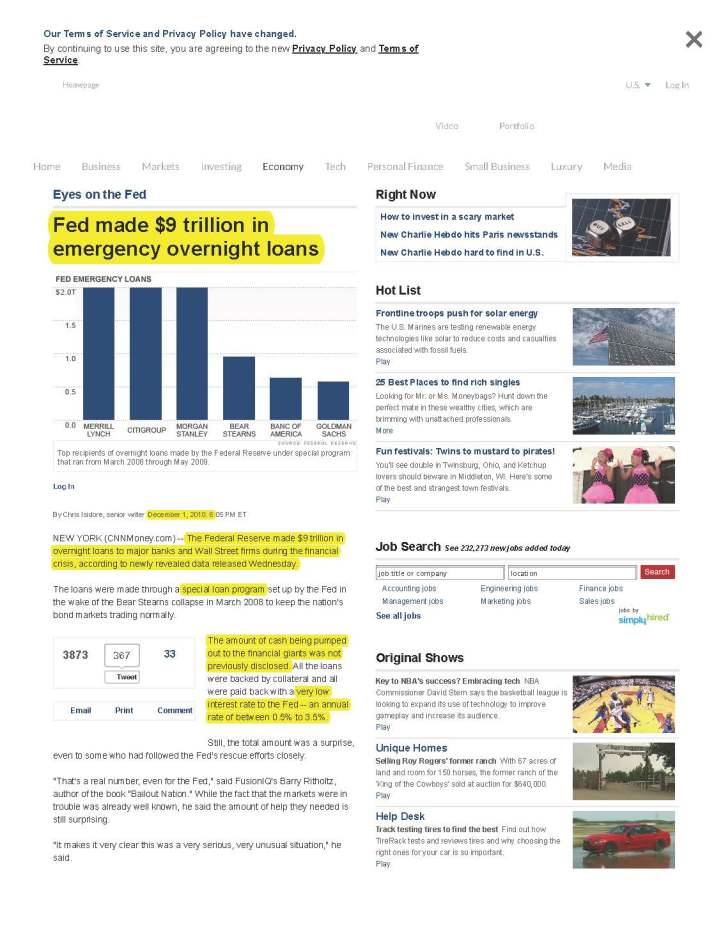 I’m going to GUESS that Inspector General Coleman was ordered not to speak about what happened to the $9 trillion dollars during her grilling by Alan Grayson because the Fed was still concerned about sparking a run on the banks if any of us “simple folk” knew how bad everything really was. That’s just my guess. However, I’d offer the following advice to Coleman and anyone else who might find themselves about to be interrogated while being filmed: Have some sort of made up and intelligent story ready to  whip out when someone is going to question you, because if you don’t, you’re going to be cannon fodder on YouTube and the internet for the rest of your life.

Now that we’ve got that “Scooby Doo mystery” solved, you may think that the Federal Reserve must have issued some pretty harsh rules and imposed stiff penalties on these banks so that such economic devastation wouldn’t happen again, right?

Well, you would be wrong to assume that. Here is a riveting and rather unsettling story produced by NPR’s “This American Life” last September called, “The Secret Recordings of Carmen Segarra:”

It is abundantly clear that the Federal Reserve is not fit to babysit that goldfish you won at the State Fair, let alone oversee the bankers and financiers who got us into this (last) mess. A mess, I might add, that led to 5 million completed foreclosures, with about 690,000 homes still stuck in the foreclosure process; 8.7 million jobs lost; and, a nifty new term called, “suicide by economic crisis,” which resulted in a 28% increase in suicide rates here in the US for people between 35-64 years of age. Here’s another cool statistic to dazzle your friends with at cocktail parties: you are now 2,059 times more likely to kill yourself than die at the hand of a terrorist. Who knew?

And so, the American people would like to thank Bernie Sanders (I-Vermont) for drafting the legislation that FORCED the Federal Reserve to disclose where they round filed that pesky $9 trillion dollar transaction paperwork and we would also like to remind Bernie to keep taking his vitamins because we are going to need him around for a very long time.