Every time you hear Public Private Partnership, a lobbyist gets his wings

And you’re going to be hearing it a lot in the next year or so. If you’re not familiar with the term public private partnership

(it’s also referred to by the nifty acronym P3), you need to do the following immediately to protect you, your family, and your community:

4. Now take that hammer and whack yourself in the head, just enough to hurt, but not hard enough to do any permanent damage.

THAT is the appropriate response to the words public

private partnerships. So now, every time you see the term bandied about in the press like some magic pill which can save our crumbling infrastructure, the negative connotation will reinforce what a truly bad idea it is.

Two of the main reasons it’s coming up so much now revolve around the US presidential election and the Trans-Pacific Partnership. The US presidential election is going to probably take the Trans-Pacific Partnership off the table for a little while, just until Hillary Clinton can find a way to say (in that deep, faked authoritarian voice that feels like nails on a chalkboard when you hear it), “I have now fixed  TPP and I feel that it is NOW a good deal so we will be signing off on it.” Of course, that’s utter nonsense and not even remotely possible, but she’s going to have to find a way to backtrack and get TPP passed without further ticking off everyone who already knows she’s lying about not supporting it in the first place.

Meanwhile, back in the real world, corporations are freaking out and seriously losing their shit over the fact that they’re not quite yet going to own each and every natural resource and bit of commerce promised to them via TPP (a similar “deal” is known as TTIP in Europe, and they’re basically rioting over not wanting it over there).

Hillary Clinton has been bringing up the subject of public private partnerships being essential for rebuilding America’s crumbling infrastructure, so she’s already teed up the general public on this one… 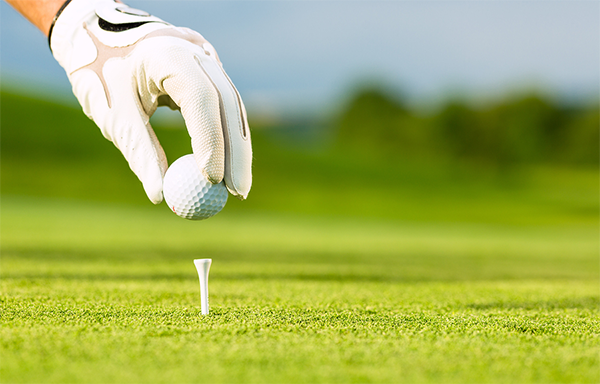 private partnerships, flat-out stating that (you may as well get the hammer out again, by the way):

So, #1 and #2 are correct. #3 is sort of correct, but it’s not the general public’s fault. And #4 is what they want you to believe. Two cases in point, both very recent. Both are on The Hill’s website, and both should scare the holy crap out of anyone old enough to read. They are essentially the same message, and can be read here and here. I’ve marked them up, as well, because there are so many red flags to point out. For example, look at this one referring to public private partnerships for water infrastructure: 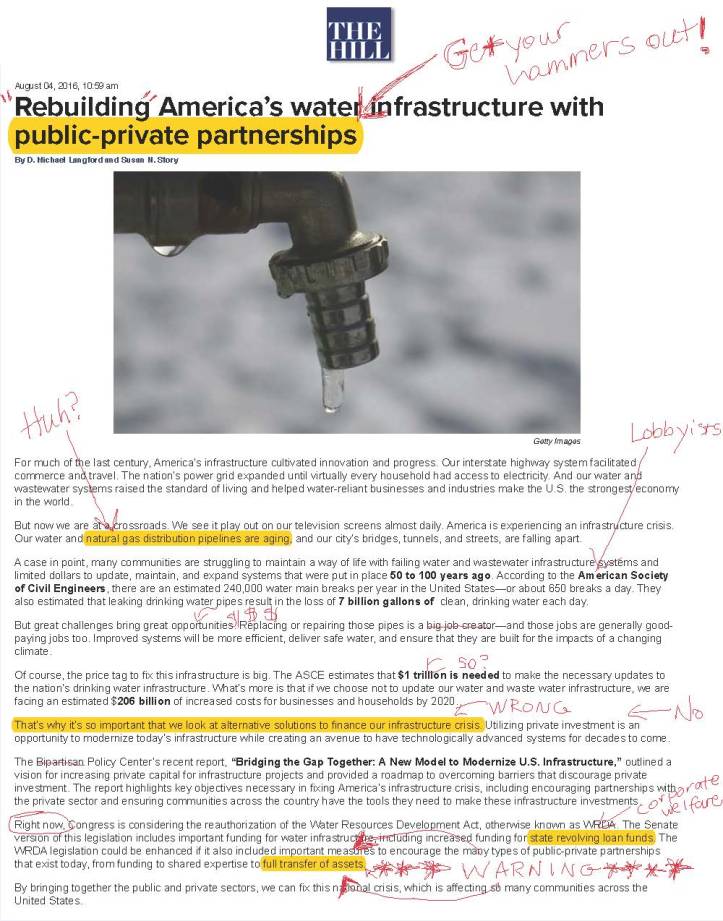 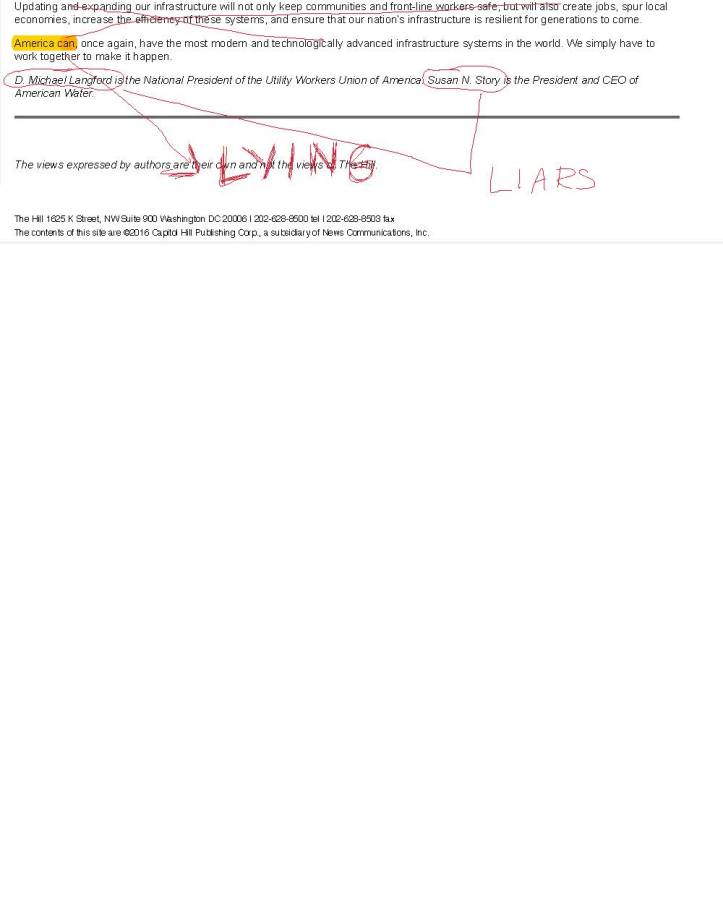 Did you catch that one turn of phrase slipped into the middle?

Next to Barack Obama’s “all of the above” energy policy, which I’ve written about many times and which has left us fracked to the hilt, can anyone think of 4 more terrifying words coming out of a lobbyist’ mouth than, “full transfer of assets?” As in, let’s fully transfer our water infrastructure, and, of course, all of our actual fresh water, to multinational corporations…

How about this next bunch of drivel…notice the warnings, threats of collapse, and then the attempt to make the whole thing look noble and presidential: 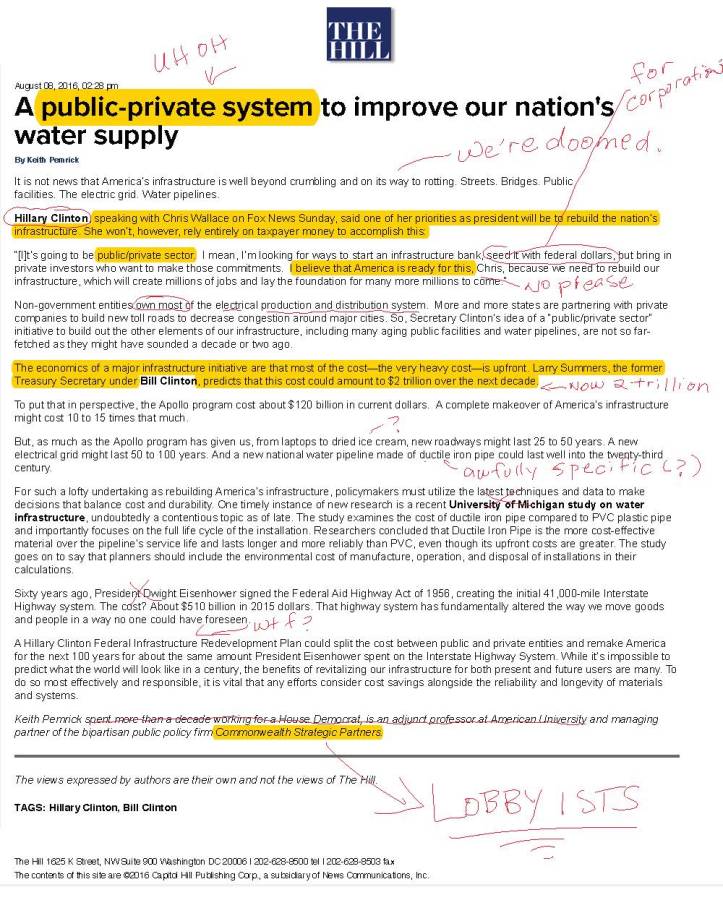 I looked into the author of the above article  (Keith Pemrick). He’s a first class sell-out and a lobbyist. He does NOT represent the public, nor care, in the slightest, about what’s good for you, me, the environment, or anyone, and any thing you cherish. He is bought and paid for by corporate money. End of story.

And it’s not just in the United States that public private partnerships have utterly gutted and destroyed virtually everything they’ve been allowed to touch and control. I recently saw an incredible report by a British organization called Public Service International Research Unit (PSIRU). The report is long. I have posted my marked up copy below in the iFrame. If it’s too small to read, click on the bottom right hand symbol and it will be “full screen.” Additionally, the PSIRU report can be accessed on the organization’s website by clicking this link.

I’ve tried to circle and mark every time they mentioned a different country so that readers can scroll through to look for what applies to them; however, public private

partnerships have embedded themselves all over the world. One country’s hard-earned ugly “lesson” should be heeded by others so we don’t all keep allowing the same mistakes to be inflicted upon each other, particularly since cross-cutting, efficiencies of scale, and globalization are ethereal bullshit concepts being bandied about like badminton birdies in attempts to convince 99% of the planet that we’re all too stupid to possibly make good decisions for ourselves.

In reading the PSIRU report in the iFrame above, I was seeing a lot of similarities with what happened to (not “in”) Flint, Michigan. I wrote several articles about Flint’s water problems earlier this year, and some of those reports apparently made their way to investigators in Michigan. Now, two of the “water expert” corporations are being charged with wrongdoing in Flint (Veolia Water and the consulting firm Lockwood, Andrews & Newnam). You can read about my findings about their dodgy work in Michigan in the Further reading section at the bottom of this page, and here is a link to a Reuters article about charges brought against the two companies.

Michigan’s water situation is not exactly what one would refer to as a public private partnership. It had not yet fully achieved that “goal” before it failed miserably and publicly. What Flint and Detroit’s water problems do have in common with P3 mentality and operating practices are the heavy reliance on consultants and corporations to oversee and decide what should be done with precious water resources. Flint is an excruciatingly perfect storm of people being told, again and again, that they are “unfit” to make decisions for themselves, which then led to a sort of “arranged marriage” between the city and some very sociopathic corporatist city managers appointed and anointed by one of the biggest advocates of public private

Here is one example from the PSIRU report which fits the Flint experience exactly (from the bottom of page 11 in the report):

“In water, the only significant investments made by the private sector are in water and wastewater treatment plants, and desalination plants, using BOT models. But these are frequently based on exaggerated forecasts of need, so that public authorities find themselves liable to pay for unnecessary capacity or excessive volumes of treated water.”

As I wrote here, Flint, Michigan has a grossly disproportionate financial responsibility for the KWA pipeline project (which is what led to them having to temporarily switch water sources). With a diminishing population of 99,000, they became legally responsible for much, much more water than they actually needed. Furthermore, they’re locked in to a payment structure and burdened with debt payments representing 34% of the entire project (!)…one city, one poor city, that didn’t need to switch the water supply they’d been using since 1966 (Detroit’s) but THAT was decided by corporate lawyers and city managers who took the decision-making process out of the hands of the people.

Ultimately, the goal of breaking up and snuffing out Detroit’s water service (DWSD) was “achieved” and what was already a bad situation has become unbearably worse. Much of this happened at the hands of lawyers and multinational corporations, like Veolia Water, who were kicked out of, sued, and jailed by their home country (France), and who are now trying to position themselves in the US to buy up, manage, and further deprecate American water resources. Just look who is a sustaining member of this bunch of lobbyists, called the National Council of Public Private Partnerships. And speaking of something being decidedly rotten in Denmark, that National Council and other lobbyists are touting a “report” about how rosy things are looking for P3s by referencing something behind a “paywall.” This is utter nonsense. The supposed report behind the paywall could literally say anything at all, and when you go to where the “paywall” is, look at how much the stupid thing costs (it’s to the far right of this screenshot):

$3,500 dollars!?? That is so ridiculous that I’m left to assume that it doesn’t even exist. These lobbyists can say anything and refer to something behind a (supposed) “paywall.” I thought I’d seen pretty much every con game imaginable engineered by the fossil fuel industry, who took lessons from the tobacco industry, but this is beyond the pale entirely.

The bottom line is this: do whatever, WHATEVER, it takes NOT to allow your city, town, state, etc., to participate in public

private partnerships. If it means that you and everyone you know goes out on the weekends to lay pipe down yourselves so that your water sources are safe and within your control, then so be it. Probably a much easier and more cross cutting (just kidding) means to that end, is to share this information, read the PSIRU report, absorb what it has to say, and make your voice heard over the roar of paid shills and lobbyists. When you see articles on websites like The Hill, or anywhere else, comment loudly and unwaveringly about just how BAD public private partnerships are. See through the false promises and deception and help others do the same, regardless of where they are. The consultants and mouthpieces for P3′s suspect that everyone hates them already, or that everyone would hate them if they knew the full story. You now know the full story. The PSIRU report gives us all plenty of ammo to use against virtually any argument in support of handing over our precious resources to those who only serve corporate financial interests. Much like there is no such thing as “clean coal,” no matter how hard you try to convince people otherwise, public private partnerships offer nothing of lasting value to those whose resources they try to control.

…..
[Yes, I was trying to prime you so that every time you see the words public private partnership, a negative image

pops into your head. I’m only half kidding]